The Words, The Sacraments, And The Company 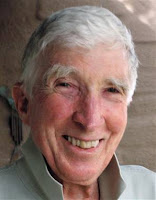 As word comes of novelist John Updike's death at 76 from lung cancer, St. Batholomew's Episcopal Church in Manhattan remembers him discussing the comforts of church during a 2004 talk:

“When I haven’t been to church in a couple of Sundays I begin to hunger for it and need to be there,” he said, standing at a podium in front of the altar, against a backdrop of Byzantine-style mosaics and dressed in a gray suit befitting one of America’s elder statesmen of letters. “It’s not just the words, the sacraments. It’s the company of other people, who show up and pledge themselves to an invisible entity.”

I believe his last novel was Terrorist, a riveting story about a Jersey-grown jihadist who blinks, thinks, and doesn't kill. Hope indeed!

Give rest, O Christ, to your servant with your saints, where sorrow and pain are no more, neither sighing, but life everlasting.
By Fr. John at 6:36 PM