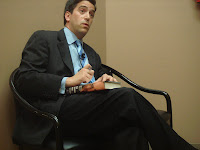 [S]ome wobbly columns in the Deep Throat temple Leak inexplicably lets stand. “Felt was much too busy and prominent a man to circle page 20 of Woodward’s home-delivered New York Times . . . or monitor the movement of a red-flagged flower pot on the balcony of Woodward’s apartment,” Holland notes. Such chores, he shrugs, “were probably entrusted to reliable [FBI] agents.” Who, exactly — and why haven’t they been identified? Perhaps, alternatively, Holland is wrong to accept Woodward’s statements about this signaling system.

Likewise, Holland describes in detail Deep Throat’s “last great leak”: the accurate disclosure to Woodward, in November 1973, that the Nixon tapes contained a deliberate erasure. Felt had been forced out of the FBI five months earlier, in June 1973, and the existence of the “tape gap,” a rather recent development, was a secret held closely by President Nixon, his secretary Rose Woods and only a few White House intimates and attorneys; so how could Felt have been in a position to tell Woodward about it?

Holland ignores this problem. The only logical conclusion — especially since other Nixon-era officials, like Alexander Haig, Donald Santarelli, and Robert F. Bennett, are known to have served as sources for Woodward — is that “Deep Throat” was more than just Mark Felt. Holland’s unusual silence on this point suggests his otherwise indefatigable research turned up no other satisfactory answer.

Put another way, how many FBI agents does it actually take to overthrow an elected president, and who inside the White House may have helped them, and why? Rosen says that the records Bob Woodward and his reporting partner, Carl Bernstein, have opened so far don't add much to the picture. But as I wrote last April, when Woodward visited the Nixon library:

He said that when he and Bernstein open more reporting files from their second book, The Final Days, people will be surprised to find that one of Nixon's intimates was especially helpful, having concluded by late 1972 that he was doomed.