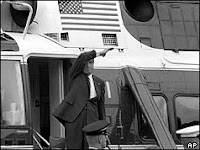 [T]he greatest disappointment of Nixon's Darkest Secrets is how minor those secrets come across as being when measured against the full evil of the man. When Nixon went before the nation on Aug. 8, 1974, and announced his resignation -- only a few days after a White House tape recording surfaced proving beyond question that he'd known everything about the Watergate break-in -- something unspoken and completely vital to the nation cracked along its entire axis. And three years later (during a 1977 interview with David Frost), when Nixon said, "When the president does it, that means it's not illegal," that crack shattered open and has never been closed since. It was an inky stain on the nation, and it spread forward in time even to the present, with the United States launching two wars, one of them illegal, mainly at the urging of two former Nixon acolytes, Dick Cheney and Donald Rumsfeld, the vice-president and defense secretary under president George W. Bush. The real Nixon was far darker than the bumbling cartoon villain Fulsom paints here -- perhaps the sharpest irony of them all.

When Nixon released the transcript of the June 23, 1972 "smoking gun" conversation, we learned that he'd briefly acquiesced in a Watergate cover-up, not that he'd "known everything" about the break-in. Still, it's actually reassuring to see the emergence of a critique of Nixon 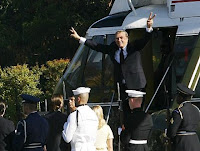 and Watergate based on his national security rather than alleged criminal predispositions. Donoghue traces a direct line between Nixon's "not illegal" formulation and Bush's Iraq war (presumably the one he thinks was illegal). Ironically, most people think the theory had to do with the Watergate break-in or coverup, but Nixon was actually offering a justification of surveillance of domestic militants during the Vietnam war. In 2008, when the misunderstanding was perpetuated in Ron Howard's film "Frost/Nixon," I wondered if Howard and scriptwriter Peter Morgan had blurred the record because post-Sept. 11 audiences would've been inclined to agree with Nixon that presidents have extra-constitutional authority to protect the the U.S. from violent extremists. Some may well think, as Donoghue does, that such impulses make a leader evil. I'll bet most probably don't.
Hat tip to Dona Christensen
By Fr. John at 7:40 PM