The Rejection Of Impossibility 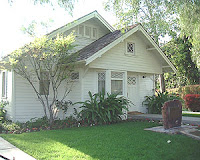 Visiting the Nixon library, Bob Greene fixes on the exhibit Richard Nixon himself loved best: The house his father, Frank, built from a kit on his citrus farm in 1912:

You stand in that structure -- you look at the bedroom, to the left of the front door, and at the bed upon which Hannah Nixon in 1913 gave birth to the child who would end up a president -- and you think of the long and tumultuous life that Nixon would go on, from here, to lead.

Most of all -- and this is the inescapable thought as you stand within those four close walls -- you ponder a United States before there was commercial airline travel, before there was television, and you picture the White House, a continent and a universe away.

It would seem: You can't get there from here.

The nature of raw ambition, and the rejection of impossibility, and the need to escape from what is to find out what will be. You stand in that nailed-together-from-a-kit house, and you try to imagine being a boy living there who has not yet learned what it is like to have strangers love you and strangers hate you, or even to have strangers know who you are. In the history of the United States, of all the hundreds of millions of people who have lived and died, fewer than 50 have become president. Where does it start?