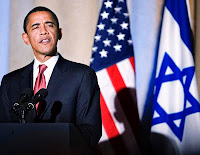 For two years Jeffrey Goldberg has been warning readers about the likelihood of Israel attacking Iran. Writing during a Middle East visit last week, Goldberg speculated that Benyamin Netanyahu may have been bluffing the whole time in order to get the U.S. to toughen its position. Andrew Sullivan, perhaps forgetting Winston Churchill's maneuvers before the U.S. entry into World War II, is shocked, just shocked that Israel would leverage and manipulate its generous ally. For his part, Goldberg admires the Washington-Jerusalem two-step:

[Obama and Netanyahu] they have accomplished something extraordinary together over the past two years. The sanctions Obama has placed on Iran are some of the toughest ever placed on any country. Even some hardliners now believe that they just might force a change in Iran’s nuclear calculus. And how has Obama convinced the world that these sanctions are necessary? By pointing to Netanyahu and saying, “If

you don’t cooperate with me on sanctions, this guy is going to blow up the Middle East.”

Obama’s good-cop routine is then aided immeasurably by the world’s willingness to believe that Netanyahu is the bad cop.

No one fully understands the dynamic between Obama and Netanyahu, apart from the men themselves. And no one, maybe not even their closest advisers, knows what they said to each other when they met alone March 5 in the White House. I recognize the suggestion that the two men are deliberately tag-teaming Iran is a bit much to swallow, and I recognize, too, that believing Netanyahu never intends to attack Iran by himself is dangerous.

When word got around the Episconixonian newsroom about Goldberg's use of that particular law enforcement metaphor, our voices were raised as one proclaiming "Holy Guacamole!" Back on Feb. 22, I wrote:

Whether taking the threat of an Israeli or U.S. attack seriously would lead to war or the negotiating table remains an open question. It occurs to me that President Obama and Prime Minister Netanyahu, without having set out to do so, have fallen into a good cop, bad cop dynamic that is making the threat of an Israeli attack seem more imminent than it perhaps is -- which, again, may help draw Teheran into a meaningful conversation about how to avoid war, which would be by not developing a nuclear weapon. George W. Bush pulled off something similar with Libya.