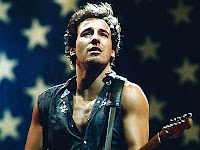 Rough being Richard Nixon this week, with his diabolical influence being plotted well into the 21st century (he resigned in 1974 and died in 1994). Steve Donoghue blames him for Iraq, calling Nixon's national security fixation "an inky stain on the nation, and it spread forward in time" to what Donoghue calls an illegal war launched by his former operatives. In his March 29 Rolling Stone interview with Jon Stewart (not available in full on-line; I'm a proud subscriber), Bruce Springsteen also waxes metaphorical in saddling Nixon and his men with Wall Street greed, the subject of his new song "Easy Money":

That's the street criminalization of the big-money Wall Street hustle. That's the guy that's saying, "Everybody else is getting theirs, and not paying for it, I'm going out to get mine." That hustle has been legitimized over the past four years, when you have the level of risk and greed at the top of the financial industry, and people basically walking away, relatively scot-free, completely unaccountable. That lack of accountability is the poison shot straight into the heart of the country. It goes back to Watergate. Watergate legitimized the hustle at the top of the game -- it legitimized every street-corner thug. You almost had the country brought down by it, basically. All the radical hippies, longhairs -- no one ever came as close to sinking the USA as the guys in the pinstriped suits.