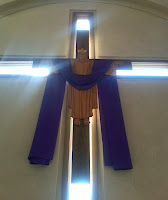 As Christians prepare for Holy Week, which among other things is about our complicity in the killing of Jesus Christ, David Brooks suggests that most of us are theoretically capable of crimes such as the massacre Robert Bales allegedly committed in Afghanistan:

David Buss of the University of Texas asked his students if they had ever thought seriously about killing someone, and if so, to write out their homicidal fantasies in an essay. He was astonished to find that 91 percent of the men and 84 percent of the women had detailed, vivid homicidal fantasies. He was even more astonished to learn how many steps some of his students had taken toward carrying them out.

One woman invited an abusive ex-boyfriend to dinner with thoughts of stabbing him in the chest. A young man in a fit of road rage pulled a baseball bat out of his trunk and would have pummeled his opponent if he hadn’t run away. Another young man planned the progression of his murder — crushing a former friend’s fingers, puncturing his lungs, then killing him.

These thoughts do not arise from playing violent video games, Buss argues. They occur because we are descended from creatures who killed to thrive and survive. We’re natural-born killers and the real question is not what makes people kill but what prevents them from doing so.