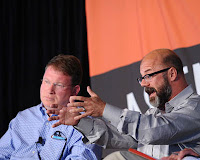 Bloggers Jeffrey Goldberg and Andrew Sullivan profess to remain friends, though their public argument over Israel and the Palestinians has become so heated that it's hard to imagine their finding much common ground to have a beer over. Today Goldberg appears to take it up a notch by accusing Sullivan of personalizing the issue to an alarming extent:

I remember when Andrew, of course, characterized Palestinians as devils and thought Israelis wore halos, but this was before, as he told me over lunch one day a couple of years ago, he realized that Netanyahu, in his opinion, was standing in the way of President Obama's destiny. Once Netanyahu got in the way, Andrew said, he was finished defending Israel.