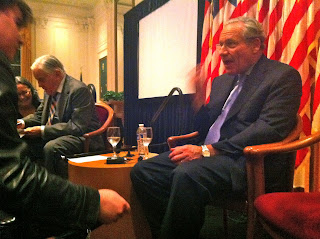 If you've seen "The Last Waltz," the documentary about the Band's last concert, you remember the bit with Robbie Robertson and the fly. "Catch that fly," says his buddy, director Martin Scorsese, when the guitarist and songwriter is being bugged during one of their interviews about life on the road. Last night at the Nixon library, the irascible Ben Bradlee, 89-year-old former executive editor of The Washington Post, was listening to a colloquy between his superstar reporter, Bob Woodward, and Nixon library director Tim Naftali when he waved his hand in the air and interrupted them. "There's a goddamn fly here," Bradlee said.

"Hit it with your stick," Woodward said genially, nodding toward Bradlee's cane. Later, as Woodward referred in his measured cadences to Richard Nixon's emotional farewell to his White House staff on Aug. 8, 1974, Bradlee got a laugh from the audience by pretending to saw on a violin.

I thought to myself that, like the Band, they should take their show on the road, which, of course, they have, for most of the last 40 years. How often has Woodward told the story of finding E. Howard Hunt's name in a Watergate burglar's notebook next to the notation "W House"? "We realized that could only mean two things," he said, pausing expertly for 600 knowing laughs before applying the rim shot. "Carl Bernstein called the whorehouse, and I called the White House." And then: "Ben doesn't like this, but I'll say it anyway. All good work is done in defiance of management." Turning to his ex-boss Bradlee, he said, "Go ah

ead. Give me the finger." With practiced timing, Bradlee complied.

Comic turns by old colleagues and friends couldn't take all the sting out of the story of an administration and a nation in crisis. Woodward was especially moving as he described how, after 25 years, he'd come to the conclusion that Gerald Ford had done the right thing in pardoning Nixon. He said that when he and Bernstein open more reporting files from their second book, The Final Days, people will be surprised to find that one of Nixon's intimates was especially helpful, having concluded by late 1972 that he was doomed.

Now that we know the name of Woodward's most famous source, FBI official Mark Felt, the architecture of the Post's Watergate story is clearer than ever before. Woodward said last night that he first checked with Felt after learning within a few days of the Watergate break-in of the connection betwee

n Hunt and White House operative Chuck Colson. Felt replied that the Post would be on the right track with any negative story about Colson and Hunt -- another laugh line, but also a reminder that a powerful official was using his access to raw FBI files to undermine the president who had denied him the prize of the FBI directorship.

Woodward is shown above with Kathy O'Connor, Nixon's last chief of staff, who organized the campaign to build the $13.5 million wing where Woodward and Bradlee spoke and where the Nixon White House and Bob Haldeman operatives now controlling Nixon's foundation, although absent last night, keep their offices.

During the question period, I asked Woodward to remind his audience when he'd first met Mark Felt. In the Nixon White House, he replied, when Woodward was still a naval officer. I'm skeptical about the theory that the reporter was part of a "Seven Days In May"-style conspiracy hatched by the Pentagon and proto-neocons against a president who was making peace with the Soviets and Chinese and in Vietnam (although Woodward retains exceptionally good sources among the brass). Still, Felt's resentment of Nixon and revelations of his own illegal activities have muddied the Watergate. Woodward said in passing 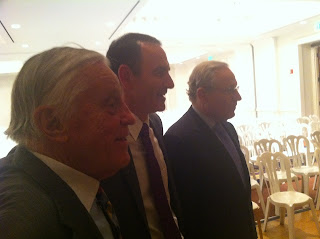 that Felt "had some glimpse" of intelligence community abuses. That's for sure. At the same time he was waxing pious with the Post about Nixon administration abuses, he was ordering illegal black bag jobs against the anti-Vietnam war Weathermen.

When Kathy and I greeted Woodward after the event, with characteristic solicitousness he asked for our impressions of his comments. I told him that I had always experienced him as a bit of a Watergate puritan, so offended by Nixon's lapses that he had trouble taking a balanced view of Nixon's legacy. But last night, he ended on a hopeful note, beginning with what President G

eorge W. Bush had said about how history would view the Iraq war. In an Oval Office interview with Woodward, Bush shrugged and said he didn't much care, "because we'll all be dead." Same with Nixon legacy, he said. It's not for us in our time to decide whether Nixon's foreign policy achievements will ultimately outweigh his failures.

Perhaps something about being welcomed to the Nixon library, with its new Watergate exhibit finally open to the taxpaying public, enabled a mellower Woodward. As for the library, last night was a boon because it proved the roof wouldn't cave in when Nixon was criticized, not because we were going to hear a fully nuanced story of modern politics' greatest scandal, no matter how integral our speakers' roles in uncovering it. Researchers in the bowels of the Nixon library may have some work to do even on that seemingly settled but complicated subject. After their talk, as I photographed Bradlee, Naftali, and Woodward, I told them that in profile, they looked like Mount Rushmore. Woodward responded, "Let history decide!"
By Fr. John at 7:30 AM