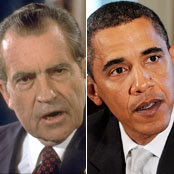 The AP's Calvin Woodward on the roots of Obama- and Romneycare in Richard Nixon's 1974 health care initiative, torpedoed in Congress by Ted Kennedy:

Nixon's initiative was bold for its time — and even bolder now — because it contained measures that have become anathema to the Republican mainstream, including a requirement that all employers offer coverage to their workers. To his everlasting regret, Democratic Sen. Ted Kennedy, his party's broker on health care, chose not to seal a deal with Nixon along those lines, reasoning that a Democratic president down the road could achieve a single-payer government system like Canada's.

"You never know how the thing would have played out," said [Stuart] Altman, an architect of Nixon's initiative and author of a new book on the century-long struggle for expanded medical care, "Power, Politics, and Universal Health Care." ''There was no question that the stars were aligned in 1974 for the passage of something important."

Nixon declared, "The time is at hand this year to bring comprehensive, high-quality health care within the reach of every American. I shall propose a sweeping new program that will assure comprehensive health insurance protection to millions of Americans who cannot now obtain it or afford it."

With the Watergate scandal soon to destroy Nixon's presidency, health care was surely a topic he preferred to talk about. It's just not one that Romney or Obama want to talk about now.