A Tale Of Two Translators 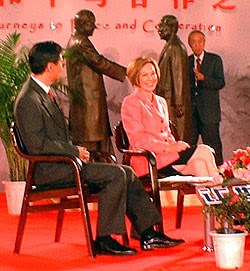 David Barboza profiles Zhou Enlai's translator, Ji Chaozhu, whom I met in 2002 when visiting Beijing with Julie and David Eisenhower. Ji and his family fled to New York City in the late 1930s after the Japanese invasion of China. When he returned after the revolution with a U.S. education and peerless command of English, he began what Barboza calls a Zelig-like career:

[H]e joined the Ministry of Foreign Affairs, and over the next 30 years served as a translator for China’s leaders, including Mao (“He complained I spoke too loudly when I translated.”); Mr. Zhou (“He was like a father.”); Jiang Qing, Mao’s wife and a member of the infamous Gang of Four during the Cultural Revolution (“She was the horror of all horrors!”); and Mr. Deng (“He was so short, I had to spread my legs to get lower when I interpreted.”)

IN those years of isolation from the West, Mr. Ji bicycled to work, earned about $10 a month and had but one blue Mao suit.

He was also one of only a handful of trustworthy and competent English-speaking interpreters in China. Another was his younger colleague Tang Wensheng, or Nancy Tang, Mao’s primary interpreter during the Nixon and Kissinger visits.

Mr. Ji said he had recommended Ms. Tang, who had been a family friend in New York. In the 1940s, their fathers had started a Chinese-language newspaper together.

When Mr. Kissinger and Mr. Nixon visited in the early 1970s, Mr. Ji and Ms. Tang served as the chief interpreters. The United States delegation usually came without its own interpreters.

“Nixon really didn’t trust the State Department to keep a secret, so we didn’t really have anyone of our own,” Winston Lord, an aide who traveled with Mr. Kissinger and Mr. Nixon to Beijing, said in an interview.

But shortly after that historic moment, Mr. Ji and Ms. Tang were drawn into the power struggles of the Cultural Revolution, which spanned the years from 1966 to 1976. Mao, in his latter years, grew suspicious of everyone around him, including Zhou Enlai. Historians say Mao’s close advisers, including Ms. Tang, struggled with Mr. Zhou and his associates.

During the same trip, I sat next to Nancy Tang at a banquet. When the conversation turned to the Sept. 11 attacks the year before, she looked at me with a steely smile on her face and in her ex-New Yorker's English berated Americans for not paying "enough attention to what's going on in the world."
By Fr. John at 8:44 PM