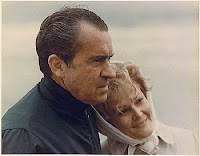 For 20 years I've been nursing an idea for a White House novel that begins on Aug. 8, 1974, the night the historical Richard Nixon announced his resignation. I feel newly encouraged by news of Thomas Mallon's new novel, Watergate. In a review, Janet Maslin describes Mallon's refreshing portrait of the Nixons:

[He] wastes no time on the familiar caricatures of a sloshed, foul-mouthed chief executive and his wooden wife. His Nixons are an affectionate couple, surprisingly relaxed (she calls him “pal”) and intimate after three decades of marriage. And the president’s public awkwardness masks something more human.

“Nixon’s self-pity was a mere overlay, a kind of plastic transparency protecting the authentic anguish visible beneath,” Mr. Mallon writes. Even a cap on his teeth poignantly appears to be “infinitesimally whiter, and curiously more sincere, than the rest of his smile.”

Mr. Taylor, Please write your book on the Nixons.  How could Mr. Nixon not welcome your efforts on his behalf should you undertake to do so? If those who knew him do not relate their experiences with him, then the field is left to those who didn’t know him, didn’t like him, and worse yet, those who seek to malign him.

After I reviewed the D.F. book on Amazon, I was contacted by a writer (psychologist) who wanted to tap my literary knowledge and impressions of Richard Nixon. I was stunned and dismayed. Is THIS how these so called historians gather their sources?? I DIDN’T KNOW Richard Nixon personally, I have only READ a great deal about him. All these books and sources that I’d read are available for anyone to read and peruse.  This guy wanted a short cut, access to crib notes, (no way!) rather than do his own very extensive readings and research. If a person is going to write the history of a life, you’d better be willing to put your own life’s work into it. That this guy would come to me, tells me a great deal about so many of the so called biographical books out there, in my opinion, if an author hasn’t spoken to the man himself or to many people who knew him, then the book has very little to offer.

When you were in New York and meeting with your publisher, I was hoping you were thinking of writing a book, your history and knowledge of the true Richard Nixon. You should! Otherwise, the Don Fulsoms of the world will fill the void. And that would be a terrible, terrible thing.

So please, write your book, and fill it with the authentic Richard Nixon. Please do, and it will find an audience hungry for the truth in a world that is so very weary of lies.

Thanks for your encouragement, Donna, as well as your devotion to the legacy of Mr. Nixon.