300 Children An Hour Dying Of Hunger 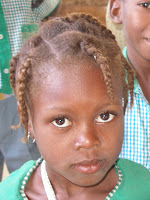 Here's an actual presidential issue, gentlemen. This is credited to the AP and Huffington Post:

Nearly half a billion children are at risk of "devastating and irreversible" damage from malnutrition, including stunted growth and undeveloped brains, according to a new report released by Save the Children. This "hidden crisis" kills more than 300 children every hour of every day and affects one in four children worldwide, according to the report.

Chronic childhood malnutrition has been called a "silent killer," as it is often not listed as a cause of death and does not benefit from as much attention as high-profile campaigns targeting malaria or HIV/AIDS.

Soaring food prices have left children particularly vulnerable. According to the Press Association, one-third of parents reported that their children did not have enough to eat, and one-sixth said that their children skipped school in favor of work. Chief executive of Save the Children Justin Forsyth outlined the gravity of the situation:

"Every hour of every day, 300 children die because of malnutrition, often simply because they don't have access to the basic, nutritious foods that we take for granted in rich countries," he said.