If it should help set up a Rick Santorum nomination, Barack Obama's fancy footwork on reproductive rights last week may be remembered as one of the best rope-a-dopes in modern political history. Santorum's gender gap would be wider that Jackie Gleason. Imagine the high fives at the White House this morning as Darrell Issa and his fellow House Republicans muzzled women at a hearing about denying them birth control. Sarah Posner reports:

One of the witnesses Issa refused to allow the Democrats to call was Sandra Fluke, a student at Georgetown University (where [Democratic Rep. Eleanor] Holmes Norton teaches at the law school), which Holmes Norton called "the foremost Catholic university in the country.

Had she been permitted to testify, said Fluke, she would have discussed the stories of Georgetown employees who are denied birth control coverage, including a woman who has lost an ovary because she was even denied coverage for pill not even needed for contraceptive, but for medical purposes. As a result of not having the proper medical care, the woman, now 32 years old, lost an ovary and is experiencing an early menopause, threatening her ability to have children.

Issa denied Fluke the opportunity to testify because she was "not qualified." She said, "women impacted by the [policy] are the most qualified to speak." Those voices, she said, "were silenced today."

Hat tip to the Rev. Susan Russell for this photo of experts testifying at the hearing about women's reproductive rights. 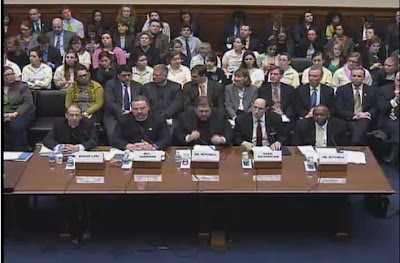