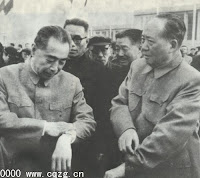 Eugene Robinson urges the U.S. to take China and its leaders seriously, especially heir apparent Xi Jinping, because they are men (mostly) who have been tested by considerable hardship. Robinson is implying that our elites are soft and dilettantish by comparison:

Xi’s father, Xi Zhongxun, once one of Mao Zedong’s lieutenants, fell out of favor and was persecuted during much of that era. Xi Jinping is part of a remarkable generation that survived the apocalypse of the Cultural Revolution; as a teenager, he spent long, hard years living in a cave in the poor, remote Shaanxi province.

Xi fared better than the man considered his chief rival for power and influence in China — Bo Xilai, the Communist Party chief for the Chongqing metropolitan area, which is home to nearly 30 million people. Bo’s father, Bo Yibo, was one of Mao’s most trusted associates before being purged in the Cultural Revolution. The whole family was sent to a prison for five years, then to a labor camp for another five. Bo Xilai’s mother either committed suicide or was beaten to death.

I recount this history because it helps me understand why the men — and a few women — now running China are the way they are: impatient to make up for lost time, pathologically wary of the slightest instability, tough, resourceful, adaptable, coldly unsentimental and, as [Henry] Kissinger generalized in his introduction, convinced “that every solution is the beginning of a new set of problems.”