Obama: To The Right Of Nixon 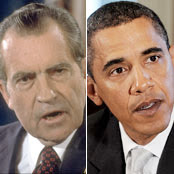 Jesse Curtis speaks up for the moderate Republican in the presidential race -- Barack Obama:

I think the Affordable Care Act is a good starting point because the president's opponents seem to agree that it, more than anything else, shows his radicalism. If we can show that this, his signature piece of legislation, is not particularly radical at all, then it calls for a reappraisal of his entire presidency.

It's worth noting some background that many conservatives, to this day, remain unaware of. The idea of universal health insurance coverage in America has been kicked around for the better part of 100 years. Presidents Nixon, Carter, and Clinton all had serious proposals to enact universal coverage, but all failed to get them passed. So when President Obama set out to get it done in 2009, he took a more cautious and less transformative approach than all of those former attempts.

In fact, President Obama was so pragmatic about it that one of the core features of the law, the individual mandate, was borrowed from the Heritage Foundation, the rock-ribbed conservative think tank. Conservatives had promoted the mandate as a way to prevent free-riders in our health care system. Rather than offloading the cost onto the rest of us when they get sick and go to the ER, the uninsured would have to take responsibility for their health by purchasing insurance or paying a yearly fee. As soon as President Obama adopted this idea, however, conservatives no longer looked at it through the prism of personal responsibility. Now it is all about governmental coercion.

In other respects, the law is also careful to implement change incrementally. Rather than instituting a socialized system in which the government owns hospitals and doctors are government employees, President Obama left the private insurance market intact. Instead of creating a bunch of new programs, the law extends coverage to millions through the existing Medicaid program, and helps others comply with the mandate through subsidies. In short, the Affordable Care Act is bringing universal coverage to America in about the least disruptive way one could imagine, and with significant deference for existing systems and institutions. (Of course, the more outlandish claims about Obamacare being socialism are thus hard to defend. If it is socialism, conservatives ought to ask themselves why so many of them promoted it in the 1990s.)