I'm Willing To Go To The Matt This Time 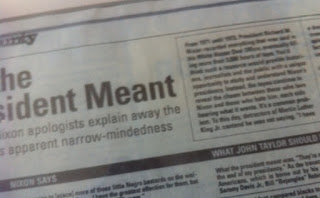 I've been playing second banana for years to Nixon gags by OC Weekly's deft polemicist, Matt Coker. In 1999 the alternative weekly ran a full page, which I attributed to him, on my attempts to cast a favorable light on President Nixon's White House tapes. My wife and Nixon confederate Kathy O'Connor had it framed.

Now Coker's ended an article about my Nixon-Rebozo post with the indelible image of 37, Bebe Rebozo, and aerosol valve inventor Bob Abplanalp (also not gay, not that it would have mattered if he were) window-shopping on Martha's Vineyard. He writes, "Nope, nothing gay-sounding there." Kathy reminds me that all three of these dudes loved to shop. Why, when we were in Beijing-- But what's the use? It may finally be time for Coker and me to meet man to man and settle our differences over lattes and fistfuls of petite vanilla scones.
By Fr. John at 12:55 PM

Just remember John, only lefty polemicists are allowed to poke fun at gayness, perceived or otherwise.

"I'm feeling faint because...because of the gayness. I love you, man!" Name that movie.

sSomeday I'll explain to you why "as good as it gets" only makes my second tier of great chick flix...

but it did supply an apropos quote.

It's this kind of biased reporting from the left that has turned me into a Republican.

Not that I've always enjoyed being the object of Matt's barbs over the years, but I draw a distinction somebody such as he -- you definitely know where he stands, right? -- and someone who hides a point of view behind a veneer of objectivity. There's a great tradition of polemical journalism on the right and the left.

My movie reference was "Talladega Nights," by the way, Paul. After our exchange of comments yesterday, I had to watch it. Kathy was so pleased!

Cokers comment to your statement, " Nixon broke down publicly for the first time at Pat's funeral".

Coker: "Of course, he could have just seen the mortuary bill" . . .

This derisive, ungentlemanly, deplorable comment speaks volumes about your adversary Mr Taylor, watch your back.

I shall, DJC. Thank you for your steadfast support of Mr. Nixon's legacy. Happy New Year.