One And A Half Cheers For Arab Women 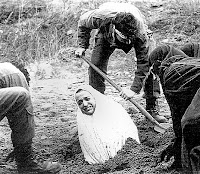 If Tunisia and Egypt can now move to democratic systems, women will have new freedoms to organize politically and to make demands on the state. Nor can outsiders pre-define women’s issues. Their actual desires may be for social services, notably lacking under Mubarak and Ben Ali, rather than for the kinds of programs favored by the old elites. In any case, while women’s causes may face challenges from conservative Muslim forces, it is healthier for them to mobilize and debate in public than for faceless male bureaucrats to make high-handed decisions for women.

Funny this idea of outsiders (I guess that would be us) not pre-defining what freedom for women looks like. I think I can pre-define it pretty well. I don't accuse Cole of being soft on women's rights by any means. But across the whole range of commentary on the Middle East, it's impossible to miss the tendency of experts to be more sanguine about the oppression of women by what Cole calls "conservative Muslim forces" than we were about, for instance, the oppression of blacks under South African apartheid.
By Fr. John at 9:59 PM