In Fairness To The Monks 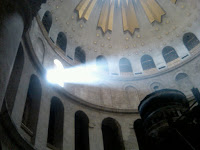 After reading about Rod Dreher's blog for years, I'm a little embarrassed that it took a nudge from David Brooks this morning to pay closer attention. He has a fascinating (and, for a political blog, exceptionally civil) discussion thread about the post-Christmas Day monk mash at the Church of the Nativity in Bethlehem. I left this comment:

As a three-time pilgrim, I try not to be too critical about the occasional clashes at churches in the Holy Land, especially Jerusalem’s Church of the Holy Sepulcher [shown here], where, as you may know, six denominations have been co-managing the premises (with a Muslim family controlling the keys) for over 150 years. I actually think we could learn something from them. How would any of us do, coexisting with our arch rivals in incredibly close quarters for the sake of a shared goal (in the case of the Holy Sepulcher, preserving and venerating the place all six agree was the site of Jesus Christ’s death and Resurrection)?

Christians do take their faith and doctrinal differences seriously in Bethlehem and Jerusalem, which makes the long days and nights of uneasy peace and cooperation between these well-publicized incidents all the more remarkable — even beautiful if one has a chance to see the intricately scheduled and sometimes overlapping worship that occurs almost constantly around Christ’s tomb.

Some of us can't take a ten-minute drive without getting mad at another motorist. Twelve members of a congressional super-committee with a combined 220 years of education couldn't agree on a budget. U.S. bosses spend millions of hours a year mediating employees' squabbles over turf, office supplies, and who was mean to whom first. (I made that statistic up, but I'll bet it's true.) Find one on-line debate about the Middle East that doesn't descend into ad hominem attacks, and we don't even live there. We're really going to make fun of people who've dedicated their live to preserving our LORD's birthplace because they sometimes have a bad day, too?

Email ThisBlogThis!Share to TwitterShare to FacebookShare to Pinterest
Labels: Church of the Holy Sepulcher, Church of the Nativity, civility, pilgrimage, Rod Dreher

Smile since it is indeed the best medicine especially to a broken heart and don't stop
inspiring us, your readers with your wonderful posts. Visit my site for more information
and have a good day. Cheers.