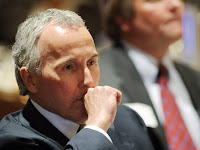 My Episcopal brother the Rev. Canon Gregory Larkin, although the most equable of souls, takes an absolutist position on any deal to sell the Los Angeles Dodgers that gives a piece of the action to the man the Los Angeles Times' Bill Plaschke calls the worst owner in franchise history. Fr. Greg's letter was just published in the Times:

As one of Bill Plaschke's army of Dodgers fans who said "no" last year, I would caution Steven Cohen, Magic Johnson or anyone else who wants to own the Dodgers that no means no. No Frank McCourt! No owning the parking lot, no paying rent for the stadium. None of my money is going to Frank McCourt in any fashion, even if it means staying away another year. So, if you're going to buy the Dodgers — you had better buy the whole thing: team, stadium, parking lots, land, the whole works. Then I'll be ready to say, "Yes."