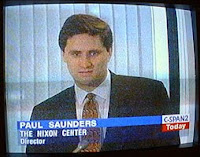 At the "National Interest," published by the Center Formerly Known As Nixon, Paul Saunders wonders why public policy pragmatism is popular but, in practice, increasingly difficult to achieve:

The underlying difficulty may lie in the changing nature of America’s public-policy debates. The dramatic multiplication of media in the United States—starting with cable television and continuing on the Internet—appears to have undermined our ability as a society to agree on the facts. Politicians, cable-TV talking heads and bloggers regularly state “facts” and “statistics” that are at best creatively engineered and at worst cynically manipulated. This is not new behavior; disingenuous political arguments are as old as politics. The transformative element is a volume of information that appears to have exceeded the capacity of our marketplace of ideas for self-correction, something that allows bad information to develop a self-sustaining life of its own. As a result, our debates sometimes seem to be between contending realities rather than contending policies.

In this environment, the content of our public-policy debates and politics appear naturally to be gravitating away from concrete policy choices—which are increasingly difficult to discuss meaningfully in the absence of a shared set of facts—and toward competing ideals. This in turn forces our debates out of the realm of pragmatism, where discussion could focus on the best means to achieve our ends, and into the world of idealism, where even modest changes in policy can be assailed as threats to America’s core principles.