In their opposition to the lower Manhattan mosque, atheists and the movement once known, ironically enough, as the religious right are combining their efforts, no doubt without meaning to, to weaken the First Amendment's command that government leave religion alone.

As I wrote yesterday, it endangers everyone's freedom when powerful politicians try to hold religious leaders publicly accountable for their beliefs, whether it's Muslims' conception of the state, the weird stuff in the Book of Mormon, Roman Catholics' opposition to abortion, or for that matter the Episcopal Church's prevailing support for gay marriage.

Notwithstanding that danger, the unlikeliest of anti-religion coalitions has taken shape in opposition to the mosque. We all know about Baptist-turned-Roman Catholic Newt Gingrich comparing Muslims to Nazis. Religionists from Gary Bauer to Hindu Human Rights Watch are on board as well. But you don't have to be faithful to ride their train to glory. Atheist Charles Krauthammer is one of the mosque's most strident critics. Atheist Christopher Hitchens doesn't oppose it per se, but he thinks Imam Faisal Abdul Rauf should be called to account for his favorable view of Iran's theocratic regime.

I don't question the motives of everyone in the atheist party. Krauthammer's position is consistent with his years of hawkish commentary about Islamic fundamentalism. Hitchens has been harder on Imam Rauf's GOP critics than on the imam himself. To paraphrase Sen. Mitch McConnell, both say they're supporters of the U.S. Constitution's religion protections, and I take them at their word.

But it's also true that a dominant theme of the post-Sept. 11 neoatheist movement is that religion does more harm than good. In the U.S., it does its nasty business under the mighty wing of the Constitution. As leading atheist voice Sam Harris wrote in 2006:

Religion is the one area of our discourse in which people are systematically protected from the demand to give good evidence and valid arguments in defense of their strongly held beliefs.

Well, not anymore, at least if you're a moderate imam following in a 1300-year-0ld Abrahamic tradition who has Jewish and Christian admirers and a wife who lobbies for women's rights within Islam. If that's you, and you want to build a community center in lower Manhattan that incl 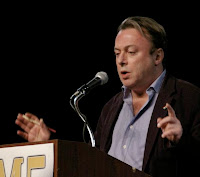 udes a tiny worship space, now you have to answer Christopher Hitchens' questions about your views on Iran. You also have to "give good evidence and valid arguments" to the Republican Party and maybe even, if the pressure keeps up, to the agencies of the City of New York that will decide your project's fate.

Krauthammer says he's not calling on government to stop the mosque. Sarah Palin summed up that argument in her Facebook challenge to President Obama: "We all know that they have the right to do it, but should they?” Palin should use her bully pulpit for a civics lesson in tolerance and freedom of religion. Instead she, fellow ex-governor George Pataki, a former speaker of the House, and other current and former officeholders are creating a hostile environment for a perfectly legitimate faith community.

As the debate becomes more and more noxious, can government action, perhaps in the form of the kind of dodge recently suggested by Chapman University constitutional law professor Hugh Hewitt, be far behind? Of course thanks to all the political and rhetorical firepower and the public's susceptibility to anti-Muslim tendencies, the anti-religion coalition might be able to drive Imam Rauf's establishment out of town without even bothering to enable a constitutionally inconvenient regulation or law such as Hewitt suggests respecting the establishment of a religion.

But just you wait. Whether they succeed in their efforts or not, the atheists and rightists will soon part company. Someday, the political winds will shift. The case of the inconvenient mosque would be a useful precedent for harassing others with unpopular or controversial views such as Roman Catholics, orthodox Jews, Mormons, and even Rick Warren and his fellow Southern Baptists. Should that moment come, religion's enemies would smile as they remembered the day when Newt Gingrich and Sarah Palin became their useful idiots.
By Fr. John at 12:20 AM