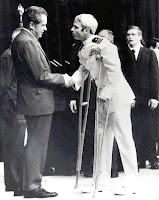 Stunning those who counted John McCain out a few months ago, GOP conservatives failed to deprive him of another term in the U.S. Senate. Once he'd scrambled to the right (and collected, it must be said, Sarah Palin's endorsement), he sailed in for an easy win in yesterday's primary against talk show host and former congressman J.D. Hayworth, who proved to be a weak cup of tea.

Ageless right-wing guru Richard Viguerie is now harrumphing and reminding McCain how much he's in debt to those who wanted so desperately to end his distinguished career. As Richard Nixon would say, and would be writing his old POW friend today in his longhand scrawl, he owes them nothing. I bet McCain starts tacking to the center again the day after tomorrow and spends what will probably be his last six years in Congress as Mr. Neo-Maverick out of sheer, joyful spite.
By Fr. John at 5:21 PM