What We Do Today And Tomorrow

This post originally appeared at The New Nixon on March 9, 2008 after a terrorist murdered eight students in the library of a yeshiva in Jerusalem. Much has happened since I wrote it, especially including the Gaza war. It was the era of another Israeli prime minister and U.S. president. But some things don't change, including the possibility that extremists will try to disrupt even the slim chances for a conclusive deal that most experts foresee as a new round of talks gets underway in Washington in early September. I took the photos, of Palestinian and Israeli schoolchildren in East and West Jerusalem, on my first pilgrimage to the Holy Land in 2007.

At the Episcopal school where I pastor and teach, each spring the 5th graders grapple with these verses from the Hebrew Testament:

Abram traveled through the land as far as the site of the great tree of Moreh at Shechem. At that time the Canaanites were in the land. The LORD appeared to Abram and said, “To your offspring I will give this land.” (Gen. 12:6-7)

This is before God gives his great patriarch the name Abraham, which happens in chapter 17 (remember, kids, that’s on the test). Abraham, from whom three billion Jews, Christians, and Muslims trace their theological lineage, is the first biblical figure whom a broad range of experts are willing to try to 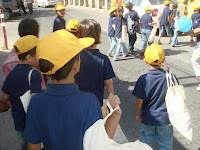 pinpoint in time. It’s thought he probably lived about 4,000 years ago, following the call of the most high God to travel from Ur of the Chaldeans (modern-day Iraq, where we’re at war today) to the promised land (ditto). My annual question to the fifth graders: Why would God give Canaan to Abram when there were people living there already? Did he love Abram’s people more? Most of the youngsters rule this out. Was he punishing the Canaanites? The Bible doesn’t say, so probably not. Is the answer even in the text? Each year a child looks between the lines and says what I hope she will say. I don’t actually know if it’s the right answer, thought I pray it is. She says, “God wanted them to share it.”

Not everyone reads this scripture like a Christian 5th grader in southern California who has no personal stake in the struggle between Israel and Palestinians and who mourns no victims of generations of terrorism and war. Secular Middle Easterners have little if any interest in anything ancient texts may teach about the present, seemingly intractable crisis. For others, the events of Abraham’s time are searingly relevant. Yaakov Shapira, chief rabbi of the Mercaz Harav yeshiva in Jerusalem — where a 25-year-old Palestinian murdered eight students studying in the seminary’s library on Thursday, most of them teenagers — reached back to Genesis as he tried to make sense of what had happened:

The murderers are the Amalek of our day, coming to remind us that Amalek has not disappeared, just changed its appearance.

My 5th graders and other Bible readers first encounter the Amalekites in Genesis 14, which discloses that they are conquered by a coalition of kings who also defeat Sodom and imprison Abram’s nephew Lot. Abram defeats the kings to save Lot, but the Amalek emerge later in scripture as nomads who harrass the people of God during their flight from Egypt and are eventually wiped out by King David. For Rabbi Shapira, this ancient blood feud should directly inform a present-day political response. As the New York Times reported Saturday,

[Shapira] said that the gunman had made targets of “everyone living in the holy city of Jerusalem” and critized the [Ehud] Olmert government for its willingness to negotiate the return of some occupied land to the Palestinians. “The time has come for all of us to understand that an external struggle is raging, and an internal struggle, and everyone believes the hour has come for us to have a good leadership, a stronger leadership, a more believing leadership,” he said. 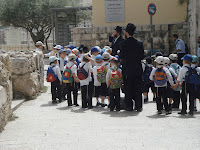 A more believing Israeli leadership would presumably accept that all of Israel’s enemies are animated by a hatred so deep and blinding that it has become part of their DNA. Some Israelis I’ve met do seem to believe as much, whether they take their cues from the Bible or not. Watching the coverage of the victims’s funerals, it is not hard to understand how they have come to believe as they do. Any person who murders children in a library is evil or insane. Family members of the murderer, Ala Abu Dhaim, say he was upset by the deaths of 126 Palestinians in Gaza last week. But even repeating that statement would seem to hint at a justification for the unjustifiable. Israel’s critics often posit a moral equivalency between casualties in its military operations and deaths from acts of terrorism. Their argument crumbles when one reads that Hamas has praised the murders even as Israel’s government grapples with both the moral and tactical challenges of launching attacks into Gaza where civilians might die. Hamas, of course, systematically puts its own people at risk, at the same time it implicitly acknowledges Israel’s superior if imperfect scruples, by locating military assets in civilian neighborhoods.

Hamas, however, is not the same as the Palestinian people. There are Israelis who can’t accept the distinction, just as there are Palestinians who are blind to the moral courage and vigor of Israelis who struggle to reconcile their entitlement to safety and security with their conception of justice in the form of some vision of a Palestinian nation next door. As dialog between Israel and Palestinian President Mahmoud Abbas has increased in recent months, and as the Bush Administration has dedicated its last year to moving the peace process forward, one has been waiting for Hamas and other extremists to disrupt the process, to do what they can to stifle and kill hopes for peace. That’s why it’s hard to believe that Ala Abu Dhaim acted alone. His operation fit perfectly into Hamas’s plan to promote chaos by provoking Israel and ultimately discrediting Abbas in the eyes of his people. It’s what violent extremists so often do — destroy hope by attacking the center and by exposing everyone residing there to the temptation of becoming violent extremists themselves in their grief, rage, and sheer frustration.

So how can the world’s responsible voices not join in support for Olmert and Abbas, Bush and Rice? How can we not keep faith with the hope that Israel and Palestine will someday live in peace, side by side? How do we keep extremists from wresting control of events from those who are committed to peace? Palestinians I know seem prepared for this work, their DNA notwithstanding, prepared to live into the truth that God wants them to share the Holy Land. Last summer I spent over a week in Al Abu Dhaim’s own east Jerusalem, albeit in the cloistered grounds of St. George’s Cathedral, seat of Jerusalem’s Episcopal bishop. Bright young Arab Palestinian Anglicans (better read that twice) working, studying, and worshiping at St. George’s reminded me of Cold War-era Muscovites in that they were capable of sitting up until after midnight one night after another talking about politics. Their brief against Israel is as heartfelt and seemingly cogent as Israelis’s against them. One is tempted to choose sides and then compelled not to, both by a newcomer’s humility as well as the feeling that Israelis and Palestinians could play they-did-it-first all the way back to Abram and the Amalekites without resolving anything. In the end, all that matters (this is admittedly a theological statement more than a sophisticated political position) is what we do today and tomorrow.