This is the first picture I took tonight with my new iPhone 4, about 20 yards from the Apple Store in Brea. Is that he? Mr. Nixon? Sure looks like it, but how would the young people know?

I'd arrived about an hour before, breezing past a dozen sad, tired people snaking along the front window, and noted with satisfaction that the store wasn't crowded. No salesperson approached me, however. After about five minutes, I asked the guy at the cash register (how's that for a retrograde term?) what the people were in line for. "iPhone 4s," he said.

I joined the line. In the course of 20 minutes three or four people walking by in the mall asked what we were waiting for. I said to the young man behind me, who was about 30, that in Moscow in the old days, people didn't ask. Toilet paper, meat, fresh eggs -- whatever it was, they needed it, so they just joined the line.

He eyed me blankly. The Soviet Union, and by and large its state-induced shortages, had ceased to exist when my companion, a pharmacist named Dan, was a little boy. He did tell me he'd worked in southern Germany for five years. He asked if my work as a priest had taken me to Russia. I paused and was about to say I'd been three times with a former President, but I was saved from that outlandish assertion by Carlo, a young man in his early 20s in a blue Apple Store t-shirt, who shook my hand and asked if I wanted the 16GB or 32GB.

You know what I said. As his fingertips danced on the screen of his own iPhone, disentangling me from Verizon forever, I gave in to the temptation to garrulousness, which has never been my tendency. I assume no one's that interested. But I'm beginning to think the privilege comes with age. Most young people listen politely to older people. It's pretty cool.

I told Carlo and his colleague that, as an AirTouch-Verizon customer since 1999, I'd gone to the Verizon store today intent on replacing my ailing BlackBerry Storm with a Droid Incredible but hadn't been able to persuade the salesman to give me an extra four months' gra 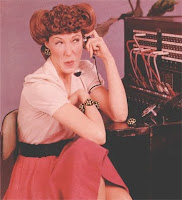 ce on my contract, which would've made the new phone affordable. It wasn't his fault. He was a good guy, but he didn't have the latitude. When I called to ask what my termination fee would be, I gave the operator another chance to give me the four months, but he didn't bite, either.

Verizon lost half a lifetime of business (okay, I'm being a little optimistic there) for a lousy four months. I told the Apple guys, "Going in there, it's like what dealing with the phone company used to be like." They eyed me blankly, too. Carlo's colleague said he'd been born in 1989, the year the Berlin Wall fell and several years after the conglomerate formerly known as today's least sought-after wireless carrier was broken up into the baby Bells, which created our raucous telecom reality.

But hey: Nixon's still cool enough for a white t-shirt at the mall. And I've got a phone that can tune my guitar and call Mars.
By Fr. John at 10:33 PM