Assuming my Nixon buddy Hugh Hewitt doesn't succeed in his proposal to end-run the First Amendment by declaring the area around the World Trade Center a religion-free zone, Trinity Episcopal Church at the foot of Wall St. will continue as it has for the last 313 years. It and its nearby St. Paul's Chapel became famous for their devoted ministry to the heroes of Sept. 11.

But Trinity's vicar, the Rev. Canon Anne Mallonee, didn't feel the love when she attended a community meeting called in May to debate the lower Manhattan mosque and cultural center. As a matter of fact, she's now being accused of being duped by Muslims:

The mission of the center is to be peace and reconciliation, inter and intra-faith understanding. Imam Feisal Abdul Rauf is not a stranger, as he and Trinity Television worked together right after 9/11 to produce a piece to promote dialogue and mutual understanding in the wake of the terrorist attacks. He leads worship in a mosque just a few blocks from St. Paul's and Ground Zero, a mosque that has been there almost 30 years.

That community board meeting was a frightening display of hatred and incivility. What I encountered there, with what I have read and heard in the months since, has only strengthened my resolve for this difficult work of reconciliation. As the issue has grown from a local concern to a national and even international tempest, particular details of content have gotten traction such as the location of the proposed 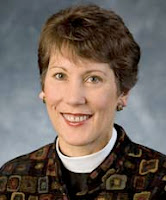 community center, constitutional rights and even the faith of the president of the United States. But underneath all this lies fear and hatred: Fear that can only be addressed through the willingness of people to come together, to address the issues that fuel the fear and build the barriers; and to reject the ingredients that foster prejudice and hatred.

Trinity has been criticized for supporting Park51, as the proposed community center is now called. I have been confronted in anger by those who ask how I can be so naïve, so stupid, so duped as to trust Imam Feisal; not because they know him personally (they usually do not) but solely because he is Muslim. The experience has led me back to the ninth chapter of Luke, when Jesus has sent the twelve to go out to preach the Kingdom and to heal. They come back later, both amazed by the work they have been able to do in his name, but alarmed because they saw an unknown stranger doing the same kind of good work. Rather than celebrate this witness to the power of God, they tried to stop this stranger. But Jesus said, "Do not stop him; for whoever is not against you is for you."

We have our work cut out for us. The need for reconciliation is only too apparent. I do not believe we can do it alone -- it will take all of us. Let us work together.