Calling The Next Dick Morris

The Republican Party (with commendable exceptions such as Grover Norquist and Ted Olson - whose wife was killed on 9/11), aided by its major media apparatus, is actively and deliberately whipping up bigotry, hate and anger - pitting Americans against Americans - for little more than electoral gain.

Read Martin's whole post. His says demonizing Islam could weaken our national security by lending credence to Al-Qaeda's core argument, which is that the U.S. and west are at war with Islam.

Of course if we think the religion of Islam is already at war with the west, we're not going to worry about that. But I don't. I do understand the temptation to think so, because unless we spend some time studying Islamic thought, culture, and life, we'll be inclined to see most Muslims as pre-reform woman-oppressors and infidel-haters. Even the gentle and learned church history teacher from

my seminary days says that most Muslims are by definition theological fundamentalists (by which he means that they're like Christians before the Reformation and Enlightenment, not that they're terrorists).

What we need, it's often said, are more Islamic moderates who embrace western political values and promote women's rights and true interfaith dialogue -- more people, for instance, just like the founders of the lower Manhattan mosque, whom Newt Gingrich has compared to Nazis. That kind of rhetoric is as low as it can be, as was Sen. Mitch McConnell's weaselly answer yesterday about the president's faith.

But Democrats won't staunch the bleeding in 2010 and win in 2012 by proclaiming that the right is exhibiting poor taste and a lack of scruples. The pickle the president's in is as much his fault as his critics', for two reasons. First, he remains surprisingly aloof to many Americans, which enables his critics to sow and exploit confusion about his motives and intentions. To know him better would be to trust him more.

Second, he should've kept mum on the lower Manhattan mosque and community center. To amplify its message going into the midterm elections that he's out of touch with the American people, the GOP had been looking for exactly what he gave them -- something sexier than the peril 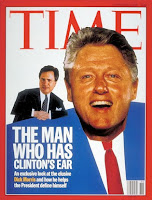 s of regulating derivatives or extending insurance to 25-year-old college students. By speaking up for the mosque, he handed it to them on a prayer mat. Tempering his support a day or two later only made it worse.

Yes, being in favor of freedom of religious expression was the right thing to do. Except it wasn't, because he hurt himself and his party without doing the mosque planners any favors. GOP spinners are already stirring pernicious doubts about his religion and unpopular support for the mosque into their already potent cocktail about his unpopular and so far ineffective policies (remember 10.5% unemployment), ending up with a toxic and perhaps even dangerous brew, to be served up to swing voters everywhere, about a strange, foreign man with secret, malign purposes.

To get himself through the midterms and especially to help him govern afterward, Barack Obama must locate some more defensible terrain from which to govern. He must figure out how to love the great pragmatic American middle and to receive its support and even affection in return. One way or the other, he must find his Dick Morris. From now on, he needs "Nixon goes to China" rather than "Obama goes to Mecca" moments.
By Fr. John at 8:41 AM