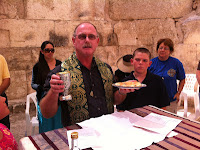 Those who think that anything goes in The Episcopal Church should read Mary Frances Schjonberg's coverage (supported by my Diocese of Los Angeles colleague, Pulitzer Prize-winning journalist the Rev. Pat McCaughan) of the painstaking debate about open communion that took place at our recently concluded General Convention in Indianapolis.

According to our national church's canons [I. 17. 7], only baptized persons are eligible to receive the consecrated body and blood of Christ. Feeling that the canonical requirement might impede the movement of the Holy Spirit in a spiritual searcher's life, some priests and parishes invite everyone to come to the table, baptized or not.

No one checks congregants' baptism IDs at the altar rail. The question is whether priests err by failing to articulate the rule or by flying in the face of it.

In Indianapolis, the Rev. Anna Carmichael, rector of St. Mark's in Hood River, Oregon, was part of an unsuccessful effort to persuade General Convention to abandon the requirement altogether. Her reasoning, as Schjonberg and her colleagues reported:

“While I understand that as a priest I have taken a vow to uphold the rubrics of the prayer book, I feel that sometimes pastoral care and pastoral sensitivity are equally as important as our theology behind what we do,” she said, adding that the Episcopal Church is always striving to extend its welcome to all people “and I hope that at some point our welcome will include unbaptized at the communion rail.”

In the end, the convention preserved the requirement. It even turned aside a resolution containing this sentence: “We also acknowledge that in various local contexts there is the exercise of pastoral sensitivity with those who are not yet baptized.” Opponents of the wording argued that while priests always reserve the right to make pastoral judgment calls, being that explicit would have amounted to a proclamation of open communion. At the core of the debate is TEC's passion for baptism as the first and greatest sacrament, the irreducible outward sign of membership in Christ. Some fear diluting its power by eliminating it as a condition for participating in Holy Eucharist.

Yet I'm sure most priests have a story about someone who probably wouldn't have decided to be baptized without first being welcomed to the table. At St. John's, the wording in our Sunday bulletin (inspired by another LA Diocese colleague, the Very Rev. Canon Michael Bamberger; that's he above, celebrating mass for us pilgrims last month at Emmaus-Nicopolis in Israel) probably wouldn't pass muster with the canonical cops:

Episcopalians consider all baptized persons to be members of Christ's Church. Wherever you are on your journey of faith, you are invited to come to the Lord's table and receive the Lord Jesus Christ in the consecrated Bread (or Host) and Wine.

The first sentence is designed to do two things. Roman Catholics and members of other denominations often come to an Episcopal parish wondering if they're allowed to receive. We want to be sure to tell them yes. It also implies that membership has its altar privileges, while the second sentence creates ambiguity by implying that membership doesn't matter when it comes to Holy Communion. Folks have asked me about the ambiguity and ended up baptized, marked as Christ's own forever, as a result. The more traditional approach, of course, is to honor baptism by refusing Holy Eucharist to the unbaptized. That's the way my Roman Catholic wife and fellow St. John's minister, Kathy O'Connor, grew up.

Even though TEC doesn't require it, some families prefer to wait until their baptized children are old enough to understand the significance of Holy Eucharist. For such families at St. John's, Randall and Kristen Lanham offer wonderful early communion classes each spring, the Episcopal equivalent of the first communion process in Roman Catholic parishes.

If parents are willing, I and most priests will give communion to anyone old enough to exhibit the curiosity and a tooth or two. We figure that people are more likely to make a habit of church attendance if they can't remember a time when they weren't welcome at the Lord's table. And welcome is the operative word. In an era of mounting skepticism about the institutional church, it's unwise for any denomination or parish to fail to make hospitality a core value.

Besides, if we should stick slavishly to I. 17. 7 and try to keep the unbaptized from the communion rail, our Roman Catholic brothers and sisters may have done us one better. Many have had the experience of being told one has to be a baptized Roman Catholic to receive communion. God bless those priests, especially at funerals, who make a point of saying that all are welcome, even though by doing so they're violating Vatican r

ules. That's why I never ask for the sacrament in a Catholic church when there's a chance that the priest knows I'm not one of his own. Why force my brother either to deny me the body of Christ or violate canon law?

For whatever reason, in late June we St. John's pilgrims didn't have to display that kind of sensitivity during an early-morning mass in the grotto at the Church of the Nativity in Bethlehem. We stood a few steps from the traditional place of Jesus's birth as a Franciscan priest from Italy served us each Holy Communion. The photo at right above shows pilgrim Christian Kassoff being communicated.

The priest may have thought we were Roman. He may not have cared. But when I blogged about the experience, my friend Charles Frazee, a specialist in church history and his Roman Catholic church, wanted to be sure I understood that no Catholic priest is permitted to deny the sacrament to someone who seeks it, baptized Catholic or not, unless the person is known to be guilty of a grave sin (being Episcopalian isn't included). TEC doesn't have that kind of universal access stipulation in our canons. So, um, are we really stricter than the pope?
By Fr. John at 8:45 PM

probably should never mention that when kids of other faiths put out their hands for communion rather than a blessing, I'm never going to turn them away.
I figure if they want the experience, who am I do deny it?