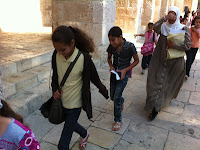 Alexander D. Baumgarten, who represents The Episcopal Church in Washington, D.C., takes justifiable pride in the even-handed, classically Anglican position our church staked out on Israel and Palestine:

As one bishop pointed out to me after final passage of...resolution [B019], we just witnessed something nearly unprecedented in the past three decades since the General Convention began addressing this subject: bishops and deputies from a variety of viewpoints on the Israeli-Palestinian conflict coming together enthusiastically and vocally in favor of a single resolution that calls for all Episcopalians to join the conversation. Equally importantly, the resolution calls for us to invite others into the conversation: Palestinians, Israelis, Jews, Muslims, and other Christians. There are to be no outcasts in the conversation, 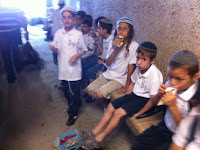 and all voices are welcome on equal terms. I can attest firsthand how rare this kind of genuine dialogue and listening is in practice, and also how fruitful it is when it does take place.

One other very important theme comes out of this very important resolution: investment of our own treasure in the Palestinian economy, and commitment to visiting, and being in partnership with, the Anglican Church in Israel and the Palestinian territories. The Anglican Bishop in Jerusalem, Suheil Dawani, a Palestinian from the West Bank, along with the Palestinian government, have repeatedly stressed the need for outside investment and the creation of economic infrastructure in the occupied territories in order to allow Palestinians to prepare for the creation of a future state. The Episcopal Church has recognized this before, but Resolution B019 gives new and important flesh to the concept.

Finally, it’s important to note what the General Convention declined to do. The House of Deputies overwhelming rejected a move to endorse boycott and divestment of Israel and the study of two documents that have been criticized by some – including the Episcopal Church’s chief operating officer, Bishop Stacy Sauls – as theologically problematic in their portrayal of Judaism. One deputy noted that these steps would have been “conversation stoppers” and that we can’t create a broader base of understanding and support for a just peace if we can’t successfully bring people to the table. Another deputy noted that economic punishment of Israel, which Bishop Dawani and the Palestinian government both have criticized, could end up hurting the Palestinian economy, as it is fundamentally intertwined with Israel’s.