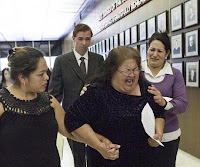 Last Tuesday's unrest in Anaheim, which has suffered five fatal officer-involved shootings this year, has attracted the attention of Jennifer Medina at the New York Times:

These shootings have exposed deep fury in a city that is better known as being home to the happiest place on earth. About 1,000 demonstrators showed up at a City Council meeting on Tuesday night, leading to outbreaks of violence and two dozen arrests.

The police were bracing for more protests over the weekend and said they had adopted a zero-tolerance stance against any city code violations, like loitering.

In this largely working-class city of more than 340,000 people, the divisions are as varied as they are deep. While more than half of the city is Latino, only three Latinos have ever been elected to the City Council. But the rift is as much about class as it is about race.

For many activists, the blame lies with the City Council, whose members are primarily from eastern hills on the city’s edge, the wealthiest and least populated part of town. They complain that the Council has focused exclusively on development in the resort area at the expense of the city’s poor neighborhoods.

The photo by the AP's Damian Dovarganes shows the mother of shooting victim Manuel Diaz, Genevieve Huizar, who movingly pleaded for calm this week.
By Fr. John at 8:27 PM