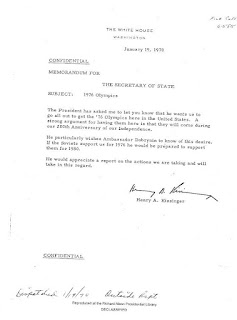 Long before realizing he would be prematurely retired in San Clemente, Richard Nixon envisioned spending the last summer of his presidency presiding over a bicentennial Olympics in Los Angeles.

In this January 1970 memo from his national security adviser, Henry Kissinger, Nixon orders Secretary of State Bill Rogers to go all out getting the '76 games and promises to support a Moscow games in 1980 if the Soviets would back the U.S. bid. The Russians got 1980 anyway, and LA hosted in 1984.

The Nixon library has more documents at its Facebook page.
By Fr. John at 2:33 PM