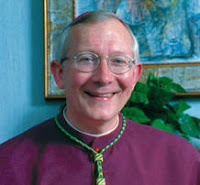 Rt. Rev. Leonard Blair, the Roman Catholic bishop of Toledo, is the man whom the Vatican assigned to quiet the Leadership Council of Women Religious (which represents most U.S. nuns) because of its members' views on contraception, the sacramental status of gay and lesbian people, and women's ordination. During a proper grilling this week by Terry Gross on her program, "Fresh Air," Bishop Blair paused to gloat about reflect on another troubled denomination:

You know, it's very interesting. In the New York Times earlier this month, there was an article, "Can Liberal Christianity Be Saved?" And, you know, the author - and I don't mean to pick on Episcopalians, because I'm just quoting what this writer said in the New York Times, but he said today the Episcopal Church looks roughly how Roman Catholicism would look if Pope Benedict suddenly adopted everything urged on the Vatican by, you know, liberal theologians and thinkers and people who dissent. But he said instead of attracting a younger, more open-minded group, he said the church is really experiencing a tremendous drop in its - in practice. And I mean Catholicism is too having its share of problems. But, you know, this is - just becoming like the world and just accepting the secular culture's answer to all these things is not really a solution for people of faith.

The photo below of our bishops suffragan in the Diocese of Los Angeles, Mary Douglas Glasspool and Diane Jardine Bruce, shows exactly how our church looks. Our Roman Catholic brothers and sisters should be so blessed. But the Vatican's only solution is that the nuns and everyone else must continue to obey celibate male priests and bishops:

[W]hen it comes to the priesthood, and I don't know that on a program like this we're able to explore the theology of it, because it is a theological one; it's not political. It's not sociological. It's theological. About what the sacraments are and what it means for a man to stand at the altar and act in the very person of Christ as a priest.

I mean, St. Paul talks about Christ being the groom and the church being his bride. That symbolism, theologically, is very much a part of our understanding of the Mass and the priesthood. And that's, I 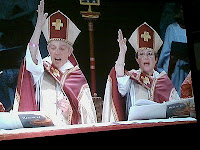 think, also why Christians who maintain their faith in a priesthood - namely, the Catholics and the Orthodox - do not have a female priest.

But churches such as in Protestantism, that speak only about ministry rather than priesthood, for them it's much easier to have women do that because it's a very different kind of faith about the meaning of these things.

The church doesn't say that the ordination of women is not possible because somehow women are unfit to carry out the functions of the priest, but because on the level of sacramental signs, it's not the choice that our Lord made when it comes to those who act in his very person, as the church's bridegroom.

Most of Jesus's followers and apostles were male. It could hardy have been otherwise in first-century Palestine, where women and children were devalued. The Son of Man taught in terms that men and women of his time could understand. Bishop Blair believes that the 21st century church must be governed according to these relatively primitive human standards, redolent with injustice and sin.

Not all Christians agree. The bishop's brief summary of Protestantism notwithstanding, in the 1970s and 1980s the Protestant Episcopal Church in the United States decided that women should and must be priests and bishops. With the guidance of the Holy Spirit -- and having recovered, through careful study of the Bible and the church's early history, an understanding of Jesus's and St. Paul's high and highly counter-cultural regard for women as leaders in the church -- we have concluded that the Savior of all humanity is just as fittingly represented at the altar by a woman as a man. Roman Catholic scholarship helped make this leap of faith possible.

When The Episcopal Church shed 2,000-year-old Mediterranean gender norms, the harder debate about gay and lesbian people awaited. For making a place for all people as God made them, critics accuse us of moral relativism and abandonment of the authority of scripture. I can only speak for myself, an orthodox Christian who believes in the saving power of Christ's life, suffering, death, and bodily Resurrection as revealed in the New Testament and the creeds and traditions of the church. I'm skeptical only about the few passages that seem to command us to discriminate against woman and gay people -- friends, relatives, and colleagues living gracious, generous, faithful lives.

Perhaps because they've seen how gender and identity debates have roiled our and the other mainline denominations, Bishop Blair and his colleagues don't want any of it. That's why he doesn't quite hear what his sisters in the Leadership Council of Women Religious mean when they plead for open dialogue. He tells Gross:

[I]f by dialogue they mean that the doctrines of the church are negotiable and that the bishops represent one position and the LCWR presents another position, and somehow we find a middle ground about basic church teaching on faith and morals, then no. That's - I don't think that's the kind of dialogue that the Holy See would envision.

But if it's a dialogue about how to have the LCWR really educate and help the sisters to appreciate and accept church teaching and to implement it in their discussions and try to heal some of the questions or concerns they have about these issues, then that would be the dialogue.

I think that the fundamental faith of the Catholic Church is that there are objective truths and there are teachings of the faith that really do come from revelation and that are interpreted authentically through the teaching office of the church, by the guidance of the Holy Spirit, and that are expected to be believed with the obedience of faith.

And those are things that are not negotiable.

Many Catholics have left the negotiating table and their church. Some have even turned up at the Lord's table in our parishes. After alluding to declining membership in the Episcopal Church, Bishop Blair seemed to bring himself up short. He may have remembered the statistics that have crossed his desk about Catholics' declining attendance at mass. Gross, his interviewer, had also reminded him about clergy abuse scandals and Catholic women's disregard for the Vatican's teachings about birth control. "Catholicism is too having its share of problems," he admitted. Indeed: A spirit-killing, extra-biblical insistence on priestly celibacy. A penchant for secrecy and coverup. And a continued insistence on the diminishment of women.