California GOP Has "Become A Cult" 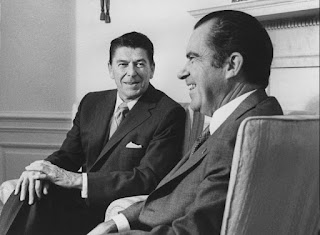 Adam Nagourney reports on the decline of the GOP in California, which has gone far to the right of its two most dominant figures:

Registered Republicans now account for just 30 percent of the California electorate, and are on a path that analysts predict could drop them to No. 3 in six years, behind Democrats, who currently make up 43 percent, and independent voters, with 21 percent.

“It’s no longer a statewide party,” said Allan Hoffenblum, who worked for 30 years as a Republican consultant in California. “They are down to 30 percent, which makes it impossible to win a statewide election. You just can’t get enough crossover voters.”

“They have alienated large swaths of voters,” he said. “They have become too doctrinaire on the social issues. It’s become a cult.”