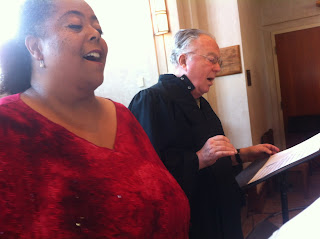 Luke's gospel records that when Mary was pregnant with the child she would name Jesus, she sang a song about God's just and righteous power (related to Hannah's song in Hebrew scripture) that the church calls the Magnificat [1:46-55]. She proclaims that God pledges to cast down the mighty from their thrones and exalt the humble and meek. It also includes these words: "And his mercy endures from generation to generation for those who fear him."

In J.S. Bach's "Magnificat in D," composed in the first third of the 18th century, the words are set to a sublime duet for an alto and a tenor. Here's a recording available on YouTube that is no more powerful that the one that Lisa Naulls and Mallory Walker offered during our 10 a.m. service at St. John's this week. They're shown during an early-morning rehearsal. Daughter of NBA and NCAA basketball legend Willie Naulls, Lisa is a gifted mezzo-soprano, vocal coach, and conductor who, as a section leader in our parish choir, raises the roof on a weekly basis. Mallory, a regular sub at St. John's, is a nationally-noted tenor who was profiled by the New York Times in 1984.

They were accompanied on organ by our choirmaster, Bob Miller, who had selected Sunday's music long before the world heard the news about James Holmes' mercilessness on Friday morning. In response to such acts of savagery, the church sometimes struggles to find the right words. From Aurora to Damascus, it can appear that humanity's inhumanity is virtually boundless.

But Lisa and Mallory knew just what to say. From the brimming heart of the brave Palestinian girl chosen to bear and mourn the savior of the world had come God's retort to all injustice and cruelty, in her time and ours. Et misericordia a progenie in progenies timentibus eum. His mercy endures forever.
By Fr. John at 7:07 PM