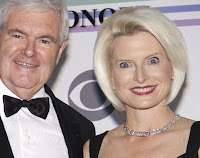 “She’s a transformational wife,” Alex Castellanos, the Republican strategist, told me. “She’s the wife who makes the candidate think he is destiny’s gift to mankind, born to greater things.”

Castellanos weaves the common tale of a “great but frustrated” man: “The first wife, and often the second, do not grasp his brilliance or grandeur. The starter wives try to confine him in their small world. But his drive to fulfill his gargantuan potential is too powerful. He rebelliously breaks conventions.

“Then he finds the muse who sees him as he sees himself. He is a man of history and belongs to something larger. She agrees that his rejections have been the fault of the audience. They cannot stare into a light so bright. She directs and channels him, saying, ‘This is what you have to do to achieve your destiny.’

“Now he is unleashed. The best and worst of him have been fed and watered.”

The Republican establishment is chasing Newt around the country with a butterfly net. But when he looks into Callista’s bright blue eyes, he’s reminded of his adolescent dreams of exploring galaxies and saving civilization.