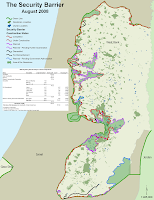 I thought I was being naive by proposing that the Palestinians accept Israel's offer of 95% of the West Bank. I'm a hard-bitten realist compared to Yoav Peled and Horit Herman Peled, who call on the Jewish state voluntarily to transform itself into an Arab state:

Instead of pursuing the mirage of a two-state solution, would-be peace makers should recognize the fact that Israel and the occupied Palestinian territories in fact constitute one state that has been in existence for nearly forty-five years, the longest lasting political formation in these territories since the Ottoman Empire. (The British Mandate for Palestine lasted thirty years; Israel in its pre-1967 borders lasted only nineteen years.) The problem with that state, from a democratic, humanistic perspective, is that forty percent of its residents, the Palestinians living in the West Bank and Gaza, are non-citizens deprived of all civil and political rights. The solution to this problem is simple, although deeply controversial: establishing one secular, non-ethnic, democratic state with equal citizenship rights to all in the entire area between the Mediterranean and the Jordan River.