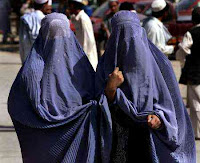 After 22-year-old Storai (her only name) is murdered by her mother and husband in northern Afghanistan for not giving birth to a boy, experts reflect on the status of women:

Manizha Naderi, executive director of Women for Afghan Women, which runs shelters for abused women, said that while she had seen cases in which women were bullied by their husbands through pregnancy, and that sometimes a husband even took a second or third wife if the first wife continued to have girls, murder was unusual.

“Girls are looked down upon in Afghanistan,” Ms. Naderi said. “I have heard of many cases where the wife is threatened with violence and beaten up, but I have never heard of a woman being killed for having a girl.”

Heather Barr, an Afghanistan researcher for Human Rights Watch, said that there was a cultural tolerance for violence against women and impunity for men who committed it, and that recent efforts to protect women had had scant effect.

“What is most disappointing,” Ms. Barr said, “is that the 2009 Elimination of Violence Against Women Law was supposed to change this, and it has had very little impact so far.”

She said rules in the penal code specified that a husband could kill his wife for having had sex outside of marriage. Even the civil code has rules allowing a husband to take a second wife if the first one is not procreating satisfactorily, Ms. Barr said.