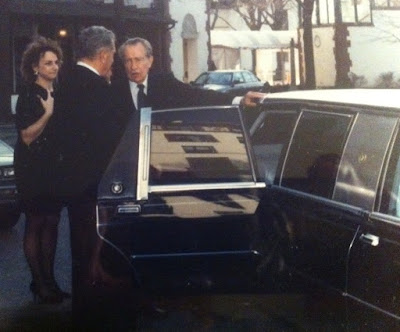 This is almost certainly the last photo taken of Richard Nixon. On Saturday, April 16, 1994, he was headed home from the Westchester (New York) Country Club after attending the wedding of a family friend. He's shown with his chief of staff, Kathy O'Connor (rocking that perm), and the bride's father, Bob Abplanalp, inventor of the aerosol valve and third musketeer to Nixon and Bebe Rebozo. Note as well the Chrysler limo. 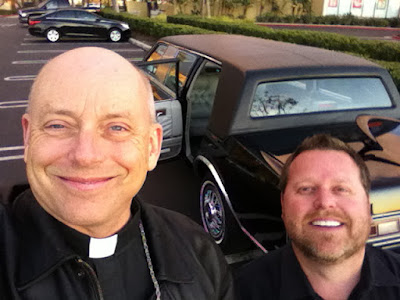 On the Monday after the wedding, Nixon suffered a devastating stroke as he sat on the deck of his Upper Saddle River, New Jersey home, savoring an evening in spring and awaiting dinner. He died on Friday, April 22. The following week Kathy and his family returned his body to California, where Noah McMahon, about 2,000 other helpers, and I (then director of the Nixon library, where he would be buried next to Mrs. Nixon) were waiting. A Chapman University undergraduate, Noah volunteered to help with parking. He now runs two companies he founded, Anonymous LLC and the Giving Back Fund, and serves on the school committee at St. John's. Note as well the Chrysler limo. 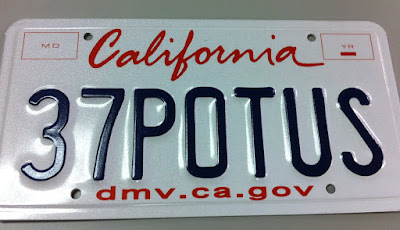 Noah acquired the historic wheels several years ago from Bob Stanley of Bronxville, New York, who had bought it from Nixon's estate (of which I was co-executor). Noah had it painstakingly restored. This week, he picked up the attention-commanding license plates. He plans to lend Nixon's Chrysler to organizations for their fundraisers and silent auctions. If those whitewalls could talk!
By Fr. John at 7:46 PM

Interesting to see that the last picture of President Nixon was taken at Westchester Country Club.

In fact, I'd better add that detail to the text! Thanks, Randall.