Not An Enemy. They Just Wanted To Beat Him. 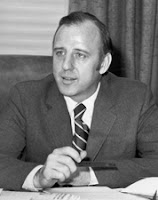 In a "60 Minutes" profile of NFL commissioner Roger Goodell, correspondent Steve Kroft said that Goodell's father, Sen. Charles Goodell (R-NY), was on the Nixon White House enemies list. Not true. The list is here; a longer list of political opponents is here. Neither contains Goodell's name.

Nor, however, was he on the White House secret Valentine list. Gov. Nelson Rockefeller appointed Goodell, a congressman, to finish Sen. Robert Kennedy's term after his 1968 assassination. Because of his opposition to the Vietnam war, in the 1970 midterms Goodell lost the support of the state's powerful Conservative Party, which nominated James Buckley, who won -- and later made history by calling for Nixon's resignation during Watergate.

Goodell may have concluded that he was on somebody's list after Vice President Spiro Agnew called him "the Christine Jorgensen of the Republican Party" for waxing from a conservative congressman to a liberal, anti-war senator (and therefore, presumably, less of a man, according to the mentality of Agnew, the proto-Newt Gingrich of the Republican Party). Jorgensen, who'd had gender reassignment surgery, asked Agnew for an apology; he refused.

So Goodell wasn't an official enemy. Nixon just wanted him out of the Senate. I can well understand why his family might consider this a distinction without a difference. But we fight for every yard in a cloud of dust at The Episconixonian.
By Fr. John at 7:35 PM

My friends and I have been raising a considerable "cloud of dust" of our own over at the WaPo Feldstein article comment section over the weekend. Interest seems to be waning now and rational opinion prevailing.

Mr. Feldstein is hardly a Nixon apologist. He unfairly accused him of pocketing the 100K that Howard Hughes gave Bebe Rebozo, for instance. So his op-ed ought to carry some weight. So far nothing in the NY Times, which gave Summers' book undeserved respectability 11 years ago.

Thanks for your good efforts.

Yup! know. I read his book last year. I try to look at all the books on Nixon, even those by disagreeable, dishonorable and overstepping authors like Summers, and Brodie. ick!