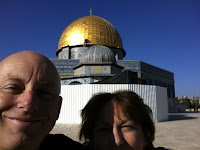 Responding to false reports emanating from a man of God that Jews were planning to desecrate Muslim holy sites, 50 Muslims stoned Christians tourists who were visiting the Temple Mount in Jerusalem on the LORD's day. Covering the incident, Israel Today magazine reports:

Because of the constant threat of Muslim violence, and despite the fact that the Temple Mount is the most holy place on earth to Jews and many Christians, the Israeli police comply with Muslim demands for harsh restrictions on non-Muslim visitors to the site. For instance, Jews and Christians are forbidden to carry Bibles atop the Temple Mount or to utter even silent prayers within its walls. Jews and Christians are regularly detained for violating these conditions.

Competing holiness claims about the Temple Mount create an unholy mess, including during arguments over where a new nation of Palestine's capital should be. It's the holiest place for observant Jews because of the First and Second temples, though some Palestinians argue, against all evidence, that they never existed. It's usually described as the third holiest place for Muslims because Muhammad is said to have ascended to heaven from the foundation stone, though some insist that Muhammad never ascended to heaven. As for Christians, Israel Today has overreached a bit. We do consider the Temple Mount a vital part of our narrative. Jesus was presented at the temple as an infant, studied there as a boy, preached there during his public ministry, predicted its destruction, and performed some housecleaning that helped get him killed.

If there's one site in Jerusalem that Christians agree is the holiest, though, it's the Church of the Holy Sepulcher, whose original structure was built in the fourth century over the place Jesus was and is thought to have been crucified, buried, and resurrected, perhaps in a quarry located outside the walls that Herod the Great built when he expanded the Second Temple in the first century before Christ. Christians have battled one another over that church, and still do, but they wouldn't go to war over the Temple Mount -- making their getting stoned for Jesus this morning weirdly ironic.
By Fr. John at 8:35 AM