Is the use of Sharia law in U.S. neighborhoods and communities a harbinger of Islamic despotism? A provocative article in the conservative religious journal founded by Richard John Neuhaus, First Things, raises a different specter: Laws aimed at banning Sharia could weaken First Amendment protections enjoyed by all faiths. The author of the article is law professor Robert K. Vischer:

Before Christian and Jewish believers support such measures, they should consider the way these laws not only misunderstand the faith of their Muslim fellow citizens but threaten their own religious liberty. Muslim Americans who seek to use Sharia are not asking the American legal system to adopt Islamic rules of conduct, penal or otherwise. Muslims have introduced Sharia in court not in an attempt to establish a freestanding source of law binding on litigants but rather in recognition of the norms to which the litigants have already agreed to be bound.

American courts do this every day—it’s called contract law. Even the literature being pumped out by anti-Sharia organizations shows that their target is not the threat posed by the imposition of Sharia on American society but rather the threat posed by the introduction of Sharia according to the same criteria of admissibility applied by courts to other religious codes.

In particular, the disputes implicating Sharia tend to crop up over the terms of the contract that constitutes the litigants’ marriage. (In Islam, the contract does not precede a marriage; the contract is the marriage.) The disputed terms often pertain to the distribution of property upon marriage and in the event of divorce or the husband’s death. Courts do not rubber-stamp all marital contracts, of course. But whether or not a contract formed in accordance with Sharia is enforceable should turn on whether it goes beyond the contractual conditions that would be tolerable in any other marital contract, not on the fact that it emerged from a particular religious system.

More broadly, the religious terms of an agreement do not preclude its enforcement by courts. If the rules of a Baptist church provide that a pastor can be removed only by a vote of the entire membership, a court will uphold a pastor’s challenge if the elders dismissed him without the required vote. That the church’s rule expresses the Baptist commitment to the priesthood of all believers does not preclude a court from enforcing it.

To ban Sharia or any other form of religious law puts religious citizens at a tremendous disadvantage. The rules of secular groups like the PTA, ACLU, and Humane Society all have real authority because the legal system stands behind them when disputes arise. In the same way, American law rightly stands behind the rules adopted by religious bodies unless those rules conflict with important public policies.

Courts are not going to enforce a Mayan rule about child sacrifice, but in the vast majority of cases, courts enforce religious rules. When bankruptcy courts apply canon law in determining property rights for a diocese or when courts enforce arbitration agreements based on biblical principles pursuant to widely invoked rules of “Christian conciliation,” the rule of law is not jeopardized. Anti-Shar 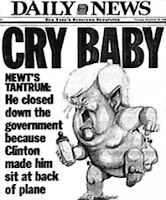 ia legislation proposes an unconstitutional double standard. Canon law and biblical principles are not dirty words in the American court system, and Sharia should not be either.

Vischer is no raging liberal. He calls states' requirements that pro-life pharmacists dispense the the morning-after pill and religious organizations provide contraceptives to employees "violations of religious freedom." He doesn't address the partisan political dimension of the issue, but it's clear enough between the lines of his analysis. So-called friends of the First Amendment such as Newt Gingrich who compare Muslims to Nazis, try to create mosque-free zones, and denounce Sharia will make it easier for secularists to encroach on religious exclusions across the board. That makes Gingrich the atheists' useful idiot.
By Fr. John at 10:20 AM