The Missing Man In Beijing

Chas W. Freeman, a U.S. diplomat who served as Richard Nixon's interpreter when he arrived in Beijing 40 years ago today, had a confession to make during an anniversary panel discussion last week at the former Nixon Center in Washington:

When I tried to sleep on Air Force One on the way to Beijing, I was jolted awake by a nightmare. I dreamed that Generalissimo Chiang K 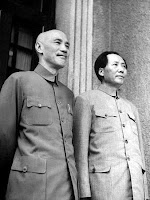 ai-shek would be standing there with his old political sparring partner and secret pen pal, Zhou Enlai. In my dream, Chiang stepped forward to greet his former friend and political backer, Richard Nixon with a loudly sarcastic “long time, no see!” As we pulled up to the shabby old structure that was then the only terminal at Beijing’s airport, I peered anxiously out the window. Others were elated to see Premier Zhou emerge to greet us. I was merely relieved that he was there pretty much by himself.