On Feb. 14's "Fresh Air," Terry Gross interviewed Tim Weiner, author of the newly published Enemies: A History of the FBI. Weiner's extensive research and measured analysis make it impossible to dismiss J. Edgar Hoover, despite his bigotry and systematic abuses of power, as the monstrous cartoon figure to which we're becoming increasingly accustomed. Weiner describes him instead as the quintessential Cold War national security zealot. Some excerpts from the fascinating conversation (all quotations are Weiner's words):

The roots of the national security state:

Hoover had a terrible premonition after World War II, that the United States was going to be attacked, that New York or Washington was going to be attacked by suicidal, kamikaze airplanes, by dirty bombs of cobalt-60 or another radioactive material. And he never lost this fear. It stayed with him for 25 years, 'til his death. It was a premonition, if you will, of the 9/11 attacks. He never forgot Pearl Harbor....Hoover is the inventor of the modern American national security state. Every fingerprint file, every DNA record, every iris recorded through biometrics, every government dossier on every citizen and every alien in this country owes its life to him. And we live in his shadow, though he's been gone for 40 years....

Hoover did not want any limits on him. He wanted no charter. He wanted no rules imposed by outsiders. He wanted the FBI to, as the secretary of state had said under Roosevelt, investigate the so-and-so's. And he believed that the Soviet Union was trying to steal America's atomic secrets, to burrow into the State Department, the Pentagon, the FBI and the White House, and he was right.

The source of Hoover's suspicions about Martin Luther King:

l War. These people were enemies of the state, and in particular, Martin Luther King was an enemy of the state. And Hoover aimed to watch over them. And if they twitched in the wrong direction, the hammer would come down.... The fact -- and it is a fact, although it's an uncomfortable fact -- that Martin Luther King's most prominent white adviser, ghostwriter of books, writer of speeches, legal counselor, confidante, was a man named Stanley Levison, who had been, at least up until the time he joined ranks with Martin Luther King in 1957, a secret member of the communist underground in the United States.

[Hoover] conflated -- and he was not alone -- communism with homosexuality. Both communists and homosexuals had secret, coded language that they spoke to each other in. They had clandestine lives. They met in clandestine places. They had secrets. And in, you know, certain cases, such as the British spy ring that penetrated the Pentagon and the CI 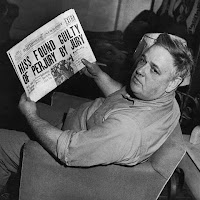 A in the '40s and early '50s, they were both communists and homosexuals. Hoover didn't see a dime's worth of difference there. They were one and the same. This was hammered into him when the FBI dealt with one of the most famous informants in the history of American government, Whittaker Chambers (right), who helped bring down secret Soviet espionage rings in this country. He was a well-known writer at Time magazine - writer and editor. Chambers was a secret homosexual and a secret communist. Hoover saw a nexus there, and he never let that thought go....

Now, of course, the $64,000 question was: Did Hoover do this because he was a repressed homosexual closet case, and he was using his rage to destroy homosexuals?...This is a myth. It's been around since 1937, since Hoover went after homosexuals and government. It was - gasoline was poured on the embers of this by Bill Donovan, Hoover's mortal enemy in government. It's been around forever. Now, what do we know that this? Hoover never married. He never had an adult relationship with a woman, other than his mother, whom he lived with until he was 43, the day she died. Hoover was also inseparable from his number two man at the FBI, Clyde Tolson. Now, the evidence -- if you can call it that -- that Hoover was a secret homosexual rests almost entirely with an account by a British journalist who's only witness is a convicted perjurer. The evidence on the other side is strong. Hoover never loved anyone, except his dogs. He was married to the FBI. And the idea that he was a secret homosexual who, you know, wore tutus for fun is a myth. Unfortunately, that's the only thing anybody seems to know about him today....

If you look at the man and you listen to people who knew him and worked with him, it's almost inconceivable for this man to have had a secret life. His entire life was devoted to the uncovering and collection of secrets on other people, including their sex lives. Could he have carried off a double life like that? When you read his work, when you listen to his tapes, when you investigate the great investigator, there's no there there.

Hoover and the roots of Watergate:

The Pentagon Papers, as your listeners of a certain age will remember, was the secret history of the Vietnam War that Secretary of Defense Robert McNamara commissioned in the Johnson years. It ran to 17 volumes, and it essentially said that, you know, we kept pushing on into the big muddy, even though we weren't going to win the war. It was a political war, not a military battle. These papers 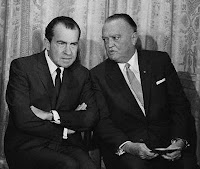 walk out of the Pentagon, out of probably the Brookings Institution, a think tank in Washington. Nixon knows within days that it's a former Pentagon officer named Daniel Ellsberg who's done it, and by God, he wants Ellsberg destroyed and tried, and he wants the evidence. You know, he wants to break into the Brookings Institution, firebomb it, send a fake, you know, fire team in there and blow the safe, as he said.

Hoover doesn't want to do this for a lot of reasons, one of which they're going to get caught. Second is that Ellsberg's father-in-law is a friend of his who gives a lot of toys to the FBI,... Louis Marx. And Hoover won't do it. Nixon goes ballistic, and that's when the Plumbers are created to do the work that J. Edgar Hoover wouldn't do.

And two generations after Hoover's death, George W. Bush with "chalk on his spikes":

There is an incredibly dramatic moment in 2004 where the head of the FBI, Robert Mueller...confronts the president of the United States in the Oval Office over the White House's secret eavesdropping program that has transgressed its boundaries and overstepped the law and the Constitution. Through its data mining tactics, through its eavesdropping technologies, they've gone beyond what even the secret court that oversees eavesdropping will authorize....And Mueller tells the president, in the Oval Office, face to face, with a handwritten letter of resignation in his breast pocket that either the program is curtailed and brought within the law or he, the head of the FBI, will resign, as will the entire command structure of the Justice Department, from the attorney general down.

And President Bush says, according to his memoirs: What are you talking about? What program? What problems? What legal issues? And Mueller look

s at him with a very steely gaze and says: I think you know what we're talking about, Mr. President. And at that point, it's a crime to lie to the FBI. It's punishable by five years in prison. And that's where we were.

[T]he president had chalks on his spikes at that moment. He was at the line, and about to cross it. And he says, Bush says in his memoir: Visions of the Saturday night massacre during Watergate dance in his head when, you know, two attorneys general and the command structure of the FBI resigned rather than cover up for the president. Mueller wins. Bush eventually backs down, and that is a triumph of the rule of law.

From Tim Weiner:
Dear John Taylor: Thank you for this kind and considerate post about ENEMIES. I hope you enjoy the book. I would love to address the Nixon Foundation anytime you'll have me. best, tw

Thanks for your gracious comment. I don't have any affiliation with the Nixon foundation, but I'll forward this exchange to the acting director of the Nixon library, Paul Wormser. I'm excited about reading the book; thanks for a riveting interview on Fresh Air.