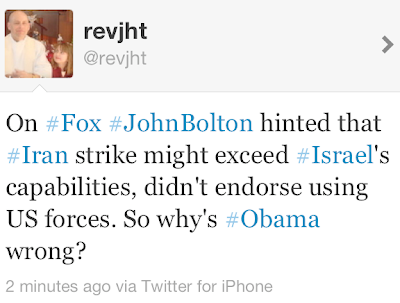 The New York Times reports that the prospective GOP nominees -- except Ron Paul, who does a reliable impersonation of a sane person on this issue -- discern that they can derive a political benefit from criticizing the Obama administration for cautioning Israel against an attack on Iran's nuclear facilities:

Republicans hope that attacks on [Obama's] support of Israel could both appeal to Jewish voters — a small but important constituency, especially in some swing states, like Florida — and to other voters who are committed to protecting Israel.

Yes, you read that correctly. All Republicans save one are reported to be advocating a reckless policy to get votes. They will no doubt say that this is the liberal media tal

king, that the idea of advocating war to impress Jewish voters never crossed their minds. Whatever their motivation, the cravenness of Obama's partisan critics was on display last night when Fox News' Greta Van Susteren interviewed former UN ambassador John Bolton. She asked what he'd do if he were president. He replied that he'd let Israel attack Iran. Van Susteren said that experts believe that Iran's capability probably can't be so easily reduced. Bolton quickly agreed, saying that the mission would be at the outer reaches of Israel's capability, which is why Israel would be better off with the U.S. playing a tactical role -- which he most certainly didn't endorse.

In other words, an Israeli attack would be difficult and might well fail -- which will be one of Obama's key taking points when he meets Benyamin Netanyahu in early March. So Mr. Ambassador, please say again: What's your beef with Obama?
By Fr. John at 3:18 PM