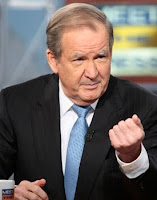 The casus belli of Buchanan's ouster was his most recent book, Suicide of a Superpower. It contains ideas, MSNBC president Phil Griffin told reporters, unfit for "national dialogue, much less on MSNBC."

Remaining on the network is Al Sharpton, whose denunciations of "white interlopers" and "diamond merchants" helped provoke violence against Freddy's Fashion Mart and the Jewish communities of Crown Heights. You will search Buchanan's oeuvre in vain for anything approaching Sharpton at his most hateful.

Many of the demographic claims made in Buchanan's book aren't particularly controversial. He borrowed the chapter titles about the end of Christian America and white America from cover stories in Newsweek and the Atlantic, respectively. His tone is generally wistful, not angry. His thesis is less that diversity is inherently undesirable than that it is difficult to manage without other bonds, values, or experiences that bring countrymen together.

Buchanan hasn't always succeeded in bringing his countrymen together either, often using words that wound people of colors and creeds who don't feel welcome in his vision of America. Despite that real shortcoming, he is a patriot who has consistently believed that his views are open to debate. Do his critics?

Not in the jungle of contemporary cable news, which has evolved from CNN's bold experiment in 24-hour TV journalism into a throwback to 19th century partisan broadsheets. To my knowledge, since Alan Colmes bailed a few years ago, Fox News hasn't had a liberal or progressive of Buchanan's stature appearing regularly. It may well be that MSNBC decided it shouldn't keep wearing Pat as a fair-and-balanced fig leaf if the other side didn't present compensatory foliage -- and that's what Fox and MSNBC are all about, Republicans vs. Democrats, tit for tat, in both cases ideology vs. substance. You don't even need to watch, because you usually know what they're going to say already. They're both streaming to the choir.