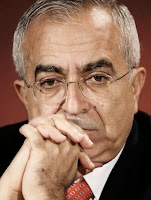 Twinned with the stunning announcement of a Fatah-Hamas unity pact is the troubling news that the able Palestinian prime minister who put the West Bank on the road to statehood is no longer welcome in office:

The announcement was sure to fuel a debate on whether Mr. Netanyahu had done enough in his two years in power to forge a deal with the Palestinian Authority led by President Mahmoud Abbas and Mr. Fayyad, widely considered the most moderate leaders the Palestinians have ever had.