Obama Plays The Trump And Loses 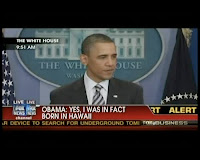 I wish I didn't think this, but I do. Donald Trump's now the frontrunner for the GOP nomination -- not because he's on TV all the time, not because he's good copy, not even because his job-creating bona fides could be incredibly appealing to voters.

It's because Barack Obama broke the first rule of incumbency by helping a pretender look like a peer.

Obama and his aides couldn't have dealt his birth certificate more ineptly. I get it that he decided two or three weeks ago, in the midst of the budget debate, that the birthers, thanks to Trump, were drawing people's attention away from matters of substance. Obama deserves credit for the public-spirited gesture of releasing the certificate even though the issue was tying the GOP in knots. But the next, equally important question was when and how to do it.

Congratulations: This morning was the worst possible choice. Isn't there someone at the White House keeping track of potential candidates' public schedules? Didn't it cross anyone's mind that it wouldn't be ideal to have Obama walk into the press room while Trump was giving a press conference about the same issue in New Hampshire?

It didn't help that Trump looked and sounded confident and imperturbable, whereas Obama sounds a little more peeved and scolding every time. Ironic that Obama called Trump a sideshow, because he put him in the center ring.
By Fr. John at 9:24 PM

Ah, I never should look at the computer when I get up in the middle of the night briefly (2:15 in the East). I have to say, I look at this diffferently. I've never felt more ashamed of a wide segment of the voters of one party in the United States than on Wednesday, when a president released his birth certificate because so many people (including Trump) were whiney babies who kept screaming, "I can't cope with the fact that you won the election."

I don't care if a Palin (now a seemingly faded star after she shot herself in the foot after the Giffords shooting) or a Trump is the nominee. Both project the same "I can't cope unless you play by my rules" disrespect for democracy. Me, I refuse to reward childishness and bad behavior. I'm betting that there will be enough people who see through Trump's bombast and self centered arrogance and the male or female Palin Mean Girl, if such a type wins the GOP nomination, to torpedo the GOP in 2012.

I'm convinced that the "we can do better" vibe of 2008 didn't disappear and that people who said enough after the Rove years didn't revert to being middle schoolers all of a sudden. Most people don't give up their values that easily. Plus the right wing media are about as clueless about issues of public integrity as they could be, laughably so, sometimes. If you look at what Steve Benen wrote at Washington Monthly about After Birthers, you can see how the Fox and Cornerites are working hard already in the aftermath of the release to bring down the GOP. I could be wrong. But that's what my groggy just woke up gotta get back to sleep head is telling me.

Let's be clear. In most people's minds, Donald Trump doesn't have any bona fides. Obama wasn't making a pretender look like a peer. He was providing the objective truth that the pretender was just as shallow and bombastic as most Americans think he already is.

Perhaps this a case where we might take the president at his word. Instead playing this for political advantage, he attempted to end the discussion once and for all so that we could move on to more important things.

But even this long form birth certificate isn't going to settle the issue for a portion of the Republican base. And that could be a real problem for the party of Lincoln when we get to 2012. I hope that the Republican party decides that they won't be well served in the long run by pandering to the birthers that are part of their base.

Thanks for your great comments, MK and Barry.

My brother: As you know as well as I, "most people's minds" and today's GOP are two different things all together. It's a long way to 2012, and I still think Bachmann's the dark horse. But I feel and fear that this issue, which Trump used opportunistically but brilliantly, and the stage he shared with Obama yesterday have put him at the head of the pack at this point.

And I do take the president at his word. As I wrote, his decision to release the long form was the responsible act of a serious man who could have milked the issue politically a lot longer, because it wasn't helping the GOP. My only quibble was with the timing.

Once the long form birth certificate was released, Trump immediately claimed credit. That might have been a brilliant move, but then he then proceeded to question Obama's academic credentials, even though Obama was the president of the freakin' Harvard Law Review. I don't think that this will help Mr. Trump in the long run.

Let's face a painful question, the elephant (how appropriate in this case) in the room: if Mr. Obama weren't black, would anyone be questioning his legitimacy? To my eyes, Trump looks like an angry white racist, an example of white privilege run amok.

Mr. Trump is playing a very dangerous game indeed. If I, a privileged white man, am disgusted with Mr. Trump, how much more disgusted will the non-white, non-privileged members of society be with his antics?

I'm with you, Barry. It's all about the GOP polls and primaries right now. Could Trump's statements and actions, as you cogently describe them, put him in dutch even with that cohort? Let me put this way. He's guaranteed to offend you and me first!