Dragging Our Feet For Egypt's Women 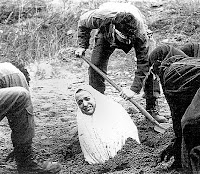 In a study of the Obama administration's foreign policy (the perennial hoo-ha between realists and idealists), Ryan Lizza reveals one reason it resisted the temptation to encourage Egyptian president Hosni Mubarak's immediate ouster:

[T]he first major problem arose when State Department officials learned that if Mubarak stepped down immediately, the Egyptian constitution would require a Presidential election in sixty days, long before any of the moderate parties could get organized. Egyptian officials warned the Administration that it could lead to the Muslim Brotherhood’s taking over power. “My daughter gets to go out at night,” Ahmed Aboul Gheit, Egypt’s then foreign minister, told Secretary Clinton during one conversation. “And, God damn it, I’m not going to turn this country over to people who will turn back the clock on her rights.”