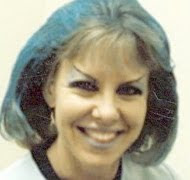 When they were working together on Richard Nixon's secretly recorded White House tapes in the 1980s, Fred Graboske and Maarja Krusten had a Star Trek thing going on. Now a government historian, Krusten is shown here in Vulcan makeup during her NARA days.

As Nixon's chief of staff from 1984-90, I wasn't a Trekkie, but I was definitely Trek friendly. That might've been the basis for some dialog with Fred, Maarja, and their colleagues. But as I reflected tonight, in a comment on a Krusten post about the tension between Nixon and the archivists, I'm not sure we would've been interested in detente:

I’m sure we all remember the old Vulcan proverb: Only Nixon could go to China.

And yet I fear we Nixonians failed the test Kirk ultimately passed in “The Undiscovered Country.” (I labored for a while over a Gorkon vs. Chang paragraph but, you’ll be relieved to to read, abandoned it.) The idea that two Nixon voters (at least) were laboring, without any guidance from agency lawyers, to do the best they could to apply the law and regs to the unique reality of the Nixon records would have been completely alien (think Romulan!) to us on Nixon’s team. I obviously can’t say to what extent the NARA side appreciated Nixon’s overpowering frustration at being a class of one when it came to the processing of a collection over which he and his family had had no oversight whatsoever before the countdown to massive and potentially humiliating openings began.

What I do know (with the useless wisdom of hindsight) is that if we’d all sat down in a room together, we at least could’ve understood one another better — though NARA’s legal and regulatory strictures might not have enabled much of a change in the release schedule. And that might be the rub. Maybe the Nixon side didn’t want understanding. We wanted our shot at the timing of a donor library, and we could only get that by unleashing Gen. Chang and Shakespeare’s dogs of war, which is to say legal maneuvers and political pressure.

The empathetic hearing we got from NARA management beginning in 1989 came as as big a surprise to us as to you. I especially regret the impact on individual careers and lives. As I’ve discussed with Maarja off-line, Kathy O’Connor (Nixon’s last chief of staff; she was holding his hand when he died) and I now have a personal understanding of how painful it can be to be pawns on a hidden chessboard (three-dimensional!).

When "Star Trek VI: The Undiscovered Country" was released in 1991, I faxed Nixon a memo from the Nixon library, which I was then running, telling him that he'd been mentioned, and by Mr. Spock, no less. I don't believe he was any more impressed by this news than by my report on "Nixon In China" a few years before.
By Fr. John at 7:32 PM