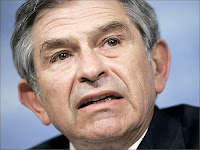 Even now, with our deficit and military groaning from two wars in Muslim countries, interventionists on the left and the right insist it’s our duty to join the battle in a third Muslim country.

“It is both morally right and in America’s strategic interest to enable the Libyans to fight for themselves,” Wolfowitz wrote in a Wall Street Journal op-ed piece.

You would think that a major architect of the disastrous wars and interminable occupations in Afghanistan and Iraq would have the good manners to shut up and take up horticulture. But the neo-con naif has no shame.

After all, as Defense Secretary Robert Gates told West Point cadets last month, “In my opinion, any future defense secretary who advises the president to again send a big American land army into Asia or into the Middle East or Africa should ‘have his head examined,’ as General MacArthur so delicately put it."